Hope for education and young people 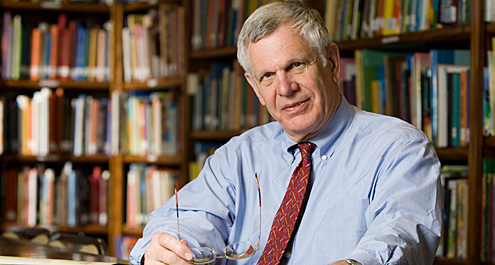 Barack Obama’s election should be positive for America’s youth, both in terms of education policy and in much more personal terms, writes Professor of Education Joseph O. Milner.

By Joseph Milner
Professor of Education

What does the Obama-Biden victory mean for American’s schools? Everything. It is not realistic to load up the new administration with too many expectations, but change is on the way.

First, and primarily, the change will be individual and personal, but sizeable. Many students who have let schoolwork slide and do not value academic achievement will be moved by our new President’s academic achievements to set the bar much higher. They have seen him spar with a formidable opponent and quietly and coolly win the day. They have seen a person they can wholly identify with — son of a single mom, raised on the edge of poverty — show not only his intellect and quickness, but that he steeped himself thoroughly in the public policy issues of our time, did his homework, was not just smart, but intellectually prepared for an arduous two-year campaign.

Additionally, and significantly, he chose his friends and associates well; he made deliberate, thoughtful choices all the way from his campaign staff, to his running mate, to those like Colin Powell who endorsed him and worked for his election. Choosing good friends is school smart and provides better life choices. He has not just embodied these personal qualities for success in school and life, but he has been explicit about the importance of these matters in daily life as well. He spoke directly, more than once, about children’s (and their parents) need to take responsibility for their futures — turn off the television, put away the video games, throw away the prison-style clothes, clean up their act, and get to work on important matters that shape their lives. Obama has taken hits for this stance from some African-American leaders, pundits and scholars, but he never backed down.

This personal message from an African-American president is primary, but there are also important educational policy matters to consider. The Obama—Biden education policy will have a profound impact. A very large majority of our fellow citizens believe that individual effort and innovation are essential ingredients of national wellbeing and growth, but they have recently come to realize that government must play a significant role in extraordinary times like these by refereeing and regulating how the large and small, strong and weak live together agreeably.

Public schools (not “government schools” as some radical individualists call them) are like public libraries, city streets, interstate highways and clean water. They are created by us all and maintained for the good of us all. Public schools, as John Dewey and many other philosophers have said, are necessary, even crucial in a republic where an informed and thoughtful electorate determines its own future — we are a government of and by the people. President Obama will give his full support to schools, hold them to high standards and fund them so that no child will be left behind.

Closely allied to Obama’s general support of public education is the specific possibility of his support of a national curriculum and more and better charter schools, and greatly increased teacher salaries. Thoughtful business leaders at IBM, Boeing and Microsoft, and educators at impressive universities have blamed our schools’ inability to do an A+ job on the lack of a national curriculum and the embarrassingly low salaries paid teachers. They argue that every other highly developed nation has a coherent, unified national curriculum where academic expectations are spelled out clearly. Such a long-range nationwide curriculum, though it could be reductive in what educational ends are sought, can keep good schools and highly effective teachers from falling prey to state and local plans that are faddish and lame and undercut our nation’s best educational efforts.

Obama’s support of charter schools rather than tuition vouchers is also crucial and will provide for innovation without undermining public support of schools. His plan to recruit an army of new teachers, too, carries with it the need to upgrade teachers’ salaries significantly. All of these are goals shared by some of the best minds in industry and higher education.

Obama’s educational stances, his personal rectitude and his new policy directions, give us reason to hope, even audaciously.

Joe Milner, a former longtime chair of the education department, joined the faculty in 1969.