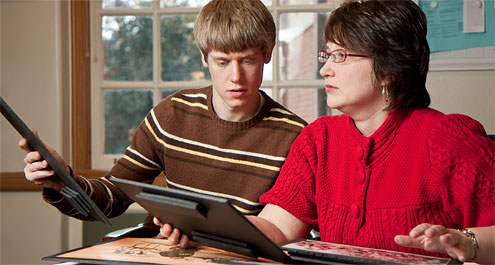 Assistant Professor of Religion Lynn Neal challenged the students in her course on religious intolerance to create a Web site incorporating what they learned in the class. “Fighting Religious Intolerance: Portraits of Hate, Lessons of Hope” uses cartoons, photographs and leaflets to show the power of visual imagery to convey hatred and misunderstanding of religious groups. Neal and one of her students, senior political science major Matt Triplett, discuss the project.

Why a class on religious intolerance?

Neal: A gap exists between the idealistic and repeated refrains of “religious liberty” that Americans invoke and the historical reality of religious bigotry and hatred in the U.S. In response, I developed a course that provided students with a more complicated understanding of the nation’s religious past.

This must have been a difficult class both to teach and to experience as a student?

Neal: The concept of balance emerged as my greatest challenge. How do you introduce students to the reality of religious intolerance in the U.S., yet help them retain hope and faith in the religious freedoms guaranteed by the First Amendment?

Triplett: Sometimes coming to class was really tough. One of our first days of class, Dr. Neal covered the blackboard with the images we had all found of the Ku Klux Klan. Looking at that collage of hatred — what one of my classmates called the “hate wall” — was really an important experience for our entire class, because it showed us the diverse ways that religious intolerance can manifest itself. From rallies to lynchings to parades, even in weddings and Christmas postcards, hatred and misunderstanding was the theme that tied all these images together. It was hard to see that entire blackboard filled with such images knowing that they only scratched the surface of the voluminous material and hate propaganda that exists.

Why did you decide to create a Web site?

Neal: The creation of the Web site became a way for students to construct something positive out of their knowledge, rather than resigning themselves to despair or apathy.

Triplett: The Web site project really made all this difficulty bearable and worthwhile because we felt like we were making a difference. I was surprised by the amount and the diversity of material that I could find with only a simple Google image search or through a quick catalog search in the library. I thought there would be a lot of overlap in the images we all brought to class each day, but, in fact, there is such a large volume of imagery that there were very few times when more than one person would bring in the same image.

Most of the images on the Web site seem to be older images. Does this mean religious intolerance is lessening or that it is being expressed more covertly?

Neal: I organized the class historically, starting with manifestations of religious intolerance in the colonial period. This earlier material coincided with our image gathering for the Web site, and using it allowed us more freedom from copyright restrictions. So, in some ways, the historical emphasis is a practical concession; however, more than that, the historical images demonstrate the central argument of the course—that religious intolerance has consistently been a part of America’s past and continues to be a part of its present. Religious intolerance is not lessening—consider responses to Mitt Romney’s Mormon faith in the presidential race.

Triplett: It is important to recognize the historic nature of intolerance in order to be able to identify new images and themes, but also to realize that hatred is nothing new in this country. When you see, for instance, that in the U.S., Catholics have been accused of sexual deviancy for well over 150 years, modern accusations seem more rooted in a historical trend of intolerance. This knowledge is empowering, because it allows us to recognize new ways that hate groups espouse the same old rhetoric. We can point to current forms of intolerance and say “look, this is the same argument that has been used for years against group x and y, and it’s just not true.”

What has been the reaction to your site?

Triplett: People are often surprised about our project. For many who do not have to face discrimination or intolerance, the fact that such hatred exists in the world seems shocking. People often forget that intolerance is alive and well in the U.S. We see in the media everyday how different religious groups are mischaracterized, over-generalized or otherwise discriminated against. Our site seeks to educate visitors about the history and prevalence of this sort of misunderstanding, and I see that it does just that when my friends say, “Wow, I never knew.”

Neal: Comments on the Web site from faculty and students have been overwhelmingly positive. Students have been surprised at the range and number of images, and this has led to discussions about the power of visual imagery, specifically how seeing these images was different from reading religiously intolerant texts. Students noted the powerful use of symbolism, as well as the artists’ ability to convey hateful messages with few or no words.

In what ways is religious intolerance expressed today?

Triplett: Intolerance is fundamentally a misunderstanding and dislike of difference. The Internet has become a popular tool for hate groups to espouse their rhetoric and to attract new members, often through retail sales of products like T-shirts, CDs and posters. This outlet makes hatred a marketable product and also makes it seem legitimate and even mainstream.

Neal: The Web allows perpetrators of hatred to disseminate their message and construct communities of support while, in large part, remaining undetected. While religious minorities continue to be frequent victims of the religiously intolerant, contemporary hate groups have also added culturally charged “lifestyle choices” to the list of individuals and groups under attack. Some perpetrators now target those endorsing feminism, homosexuality and abortion—issues that have been and continue to divide Americans (politically and religiously). Focusing on these issues provides contemporary hate groups with a way to broaden their appeal.

Americans seem careful of our language; it would seem we would be more, not less, tolerant of differences?

Neal: Political correctness is often a veneer that masks what people really think and believe. It has become something for people to hide behind, particularly in religion classes. Sometimes students tell me they do not ask questions or comment on a topic because they are afraid of offending someone. This concern for others is laudable, but I challenge the fear. Tolerance is about respect and dialogue, rather than a superficial agreement that prevents learning and growth. It entails a willingness to listen, to be open to change and to have the courage to disagree with others.

What do you hope your students took away from this class?

Neal: I hope their knowledge of American religious history is more complex and that they understand some of the central ways that religious intolerance functions in our society. I also hope that they have a stronger belief in their ability to create change (big and small) through that knowledge.

What did you gain from this class, Matt?

Tripplett: The most important benefit was an ability to recognize intolerance and misunderstanding, even when masked behind euphemistic language and colorful imagery. Legal equality and freedom of religion in the U.S. does not mean that discrimination does not exist. To truly create a space where all individuals can feel free to practice their religion as they choose, we need to be vigilant about recognizing and combating intolerance. This class gave me the ability to do just that.