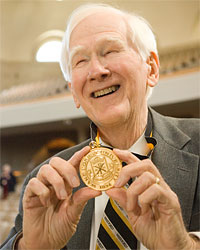 From presidents to professors and deans to donors, the Medallion of Merit has been awarded to many of Wake Forest’s most distinguished leaders.

The first recipient was Camillo Artom, an Italian biochemist who fled Italy in the days before World War II and became one of the School of Medicine’s most prominent professors. Artom had asked an American friend for help relocating and, by chance, the friend knew that medical school Dean Coy Carpenter was looking for a biochemist. Artom retired in 1961 and died in 1970. Wake Forest’s study-abroad center on the Grand Canal in Venice was named Casa Artom in his honor in 1974. His wife, Bianca, taught Italian language and literature from 1975 until 1990 and was the summer director at Casa Artom for many years before her death in 1994.

Most of the first recipients were legendary Old Campus professors who made the move to the new campus, including education professor Jasper L. Memory (’21), religion professor J. Allen Easley, and English professors E.E. Folk and H. Broadus Jones (’10). The first woman to receive the award was benefactor Clara Carswell, in 1971; a bequest of $2.2 million from her husband, Guy T. Carswell (’22), established the prestigious Carswell Scholarship. Lois Johnson, hired in 1942 as the first dean of women to watch over the female students admitted during World War II, was honored in 1973.

Professor of Biology Charles M. Allen (’39, MA ’41) is the only Reynolda Campus professor to receive the award before retiring. A scientist who loved the arts and architecture, Allen was the force behind the construction of the Scales Fine Arts Center, and he was honored at the dedication of the building’s art and theatre wings in 1976 (the music wing wasn’t built until 1982). He retired in 1989 and died in 2005.

In presenting the award in 1978 to recently retired Superintendent of Grounds Melvin Q. Layton (’47), President James Ralph Scales noted that it was usually presented to a distinguished faculty member or generous benefactor. But, he said, “If we are to be true to the University motto, then we must remember those people whose labors have made our landscape more beautiful and have increased our sense of belonging to this campus and the hills of Forsyth.”

The only time the Medallion of Merit hasn’t been presented on campus was 1979, when two Old Campus giants were honored on that campus. Following the Founders’ Day Convocation in Wait Chapel, a program was held at the Wake Forest Birthplace Society to honor Grady S. Patterson (’24), registrar from 1924 until 1972, and A.C. Reid (’17, MA ’18), chairman of the philosophy department from 1920 until 1965.

Prominent trustee James W. Mason (JD ’38) was honored in 1980 for his leadership as trustee chairman during a period of increasing tension between the University and the Baptist State Convention of North Carolina. In 1978, the University received the Alexander Meikeljohn Award for Academic Freedom from the American Association of University Professors. In 1979, Mason, an attorney in Laurinburg, NC, helped broker a deal with the convention that provided the University some autonomy in choosing future members of the Board of Trustees.

Former presidents James Ralph Scales and Harold W. Tribble received the Medallion of Merit in 1984, Scales at Founders’ Day Convocation in February, and Tribble several months later at the Baccalaureate service during Commencement weekend. Tribble died in 1986 and Scales in 1996. President Emeritus Thomas K. Hearn Jr. was honored in 2006, a year after he retired as president; he died in 2008. Russell H. Brantley Jr. (’45), a close advisor to Tribble, Scales and Hearn, was honored in 1987 when he retired after 34 years as director of communications; he died in 2005.

D. Wayne Calloway (’59), chairman and chief executive officer of PepsiCo Inc., received the award in 1986 after leading the Sesquicentennial Campaign, which had just concluded with more than $23 million raised toward the $18 million goal. From 1986 until his death in 1998, he served on the University’s Board of Trustees, most of that time as chair. The undergraduate School of Business and Accountancy and Calloway Hall — now the Calloway Center for Business, Mathematics and Computer Science — were named in his honor in 1995.

Thomas E. Mullen, who joined the history faculty in 1957 and served as dean of the college from 1968 until 1995, was honored in 1995, followed the next year by two other long-serving deans, Mark Reece (’49) and Lu Leake. Reece was director of student affairs before being named dean of men in 1963. Leake succeeded Lois Johnson as dean of women in 1964. After the separate positions overseeing male and female students were consolidated in 1984, Reece served as dean of students until retiring in 1988; he died in 1997. Leake served as assistant vice president for planning, associate vice president for academic affairs and dean of the summer session before retiring in 1997.

Undoubtedly the most colorful recipient was Willis E. “Doc” Murphrey (’52, JD ’57), a legendary character known for his famous stories and leading the cheers in Groves Stadium, no matter how bad the score. Although many of the recipients have been alumni, Murphrey was only the second alumnus — after Esquire magazine editor Harold T.P. Hayes (’48), who received the award in 1970 — who wasn’t also a faculty member or trustee to receive the award . “That’s a heck of a medal; if I hit a dog in the head with that thing, it’d kill him,” Murphrey said after receiving the award in 2005; he died later that same year.