Several awards to recognize excellence in teaching, research and service were presented to faculty members during Founders’ Day Convocation on Feb. 26: 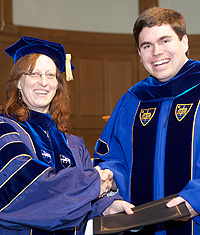 Sheri Bridges, associate professor in the Calloway School of Business and Accountancy, received the Kulynych Family Omicron Delta Kappa Award for Contribution to Student Life. She joined the faculty in 1996. The award was established in 1987 by the Wake Forest circle of ODK and endowed by the Kulynych family in 1997.

Christian Miller, assistant professor of philosophy, received the Reid-Doyle Prize for Excellence in Teaching. He joined the faculty in 2004. The award was established in 1971 and renamed in 1986 in recognition of Wilbur Doyle (’48), who endowed the prize to honor his philosophy professor, A.C. Reid.


Christian Miller and Martin Guthold, assistant professor of physics, received the Award for Excellence in Research. Guthold joined the faculty in 2001.

Charles Iacovou, associate professor of management and senior associate dean at the Babcock Graduate School of Management, received the Kienzle Teaching Award. He joined the faculty in 2001. The award was established in 2000 by Charles (’74, MBA ’80) and Carolyn Kienzle.

Jack Meredith, professor of management and Broyhill Distinguished Scholar and Chair in Operations, and Michelle Roehm, Board of Visitors Associate Professor of Marketing, received the Cowan Faculty Research Prize. Meredith joined the Babcock faculty in 1995; Roehm in 1997. The award was established in 2001 by Thomas V.E. Cowan Jr. (’72), a member of the Babcock Board of Visitors.

Christine Nero Couglin, professor of legal writing and director of the Legal Research and Writing Program at the School of Law, received the Joseph Branch Excellence in Teaching Award. She joined the law faculty in 2000. The award was established in 1985 in honor of N.C. Supreme Court Chief Justice Joseph Branch (JD ’38, LLD ’83).