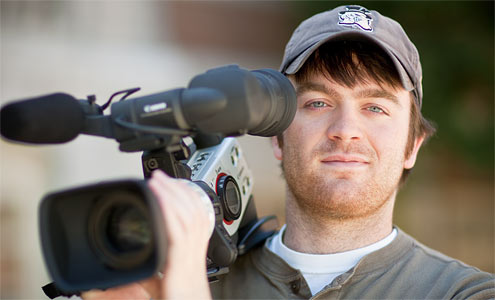 Senior Sam Smartt put his history major and film studies minor to good use making a promotional video for the Winston-Salem Rescue Mission.

For senior Sam Smartt, one factor in his decision to choose Wake Forest was his desire for a wide-angle view of the world; the other was his focused interest in film.

–>“I knew I wanted to attend a school that offered study in film, but I also knew I wanted a liberal arts education. A lot of film people are niche people with a specific skill set. For me, having an eye on the big picture makes a difference.”

Smartt, a history major and film studies minor, put his skills to the test when he created a video on the services offered by the Winston-Salem Rescue Mission to encourage people to support the mission. The Rescue Mission is a non-profit, non-denominational ministry, that offers shelter, food, job training and counseling for homeless and destitute men; a drug and alcohol recovery center for men; and community outreach programs to poor families.

He spent hours interviewing residents, many of whom are veterans. “It was very powerful when talking to people about their lives to realize a lot of my stereotypes weren’t true. Most people at the Rescue Mission are there because of a combination of bad decisions and bad luck. There’s really no difference between them and anyone else. We’re all trying to do the best we can.”

Mike Foster, the development director at the Winston-Salem Rescue Mission who hired Smartt, noticed that Smartt was connecting to the residents. “What I really didn’t expect from this project was the blessing it would be for Sam,” says Foster. “It was good experience from a work standpoint, but Sam really seemed to be moved by the experience of talking with our residents one on one.”

Smartt is editing the video as the academic year winds down. “Film editing skills are very much like the ones I use as a writer. I have to cut, paste and rework until I’m satisfied with the end product. The critical thinking and analytical skills I’ve exercised as a history major help me with this process. What requires even more care, however, is making a story out of real life while being faithful to the truth. Filmmakers have a lot of power, and I have to be very careful.”

From a technical standpoint, Smartt put into practice much of what he learned from his academic courses — including things he learned from an independent study on lighting techniques that he took for the film minor. “I’ve always thought I wanted to work on narrative films, but it was serendipitous that one of the courses I took was a documentary film-making class. I wouldn’t have known how to approach the Rescue Mission project if I hadn’t taken that course. I learned how to handle myself in a variety of situations and how to bring together all the elements of a project such as sketching ideas for what we wanted to do and how to do it while keeping to a budget.”

Smartt, whose resume also includes work with the Reynolda Film Festival and documenting this semester’s Creativity Symposium, hopes that he can stay in Winston-Salem after graduating. “Being independent and following my sense of adventure is important to me, and my decision to get a liberal arts education was a good one. I have a wide variety of skills and experiences that I’ll take with me when I graduate and these will help me relate better to people in every situation.”