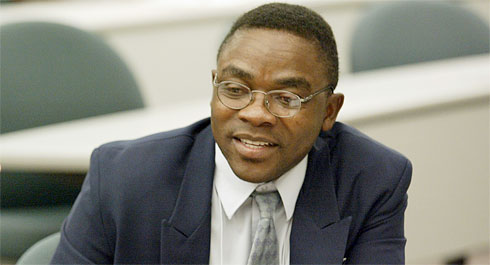 Sylvain Boko, Zachary T. Smith Associate Professor of Economics and a native of Benin, spent the past year in Uganda as a Fulbright Scholar teaching and studying post-conflict governance. He views the recent trips by President Obama and Secretary of State Clinton as evidence that Africa’s strategic importance is growing.

Secretary of State Hillary Clinton’s seven-nation trip to Africa, on the heels of President Obama’s trip to Ghana a few weeks ago, suggests a policy shift may be underway. During her trip, Secretary Clinton visited Kenya, South Africa, Angola, the Democratic Republic of Congo, Nigeria, Liberia and Cape Verde.

This is an unprecedented level of attention being paid to the continent this early in a new administration. The official line maintains that good governance and the fight against corruption are the focus of U.S. engagement with Africa. Maybe so, but I think there are reasons to believe that beyond the official line is perhaps a sign that Africa is fast becoming a strategically important region for U.S. foreign policy.

For example, the United States imports almost 25% of its crude oil from Africa. Nigeria and Angola, respectively, are the fifth- and sixth-largest exporters of oil to the United States, and they were among the seven countries on Clinton’s itinerary. The United States has a two-pronged interest with respect to its oil imports from Africa: the prevention of disruptive activities, such as wars and other conflicts that can impact the flow of African oil, and the augmentation of the proportion of the U.S. oil imports coming from Africa so as to further reduce U.S. dependence on Middle East oil. In both Angola and Nigeria, these concerns are real. Both countries are endowed with vast deposits of oil but have been plagued with internal conflicts that have prevented each one from reaching its full potential in oil production.

While the war has ended in Angola and a (still fledging) democratic system has taken hold, Nigeria continues to face internal conflict stemming from armed groups claiming to represent the interests of the populations along the oil-rich Delta region that have long been neglected by their government. One of the best known and largest of these groups is the MEND (Movement for the Emancipation of the Niger Delta), who routinely uses tactics such as kidnapping, intimidation and disruption of oil pipelines and supply lines in an attempt to get their points across. Continued disruptive activities by such groups is against the long term national interest of the United States, particularly given the weight of Nigeria as Africa’s most populous nation and west Africa’s richest.

Strategically, the Democratic Republic of Congo is important not only because of its vast mineral resources but because the country borders nine other countries in central, southern and eastern Africa. A 14-year conflict there has caused (directly and indirectly) an estimated 4 million to 5 million deaths. Democratic elections were eventually held, but the whole process would immediately collapse without the presence of one of the largest U.N. peacekeeping missions ever authorized.

Instability in the DRC spills over to its neighboring countries and beyond with very disruptive and sometimes devastating consequences, including potential for wars and humanitarian catastrophes as we have seen in Rwanda, Uganda, Burundi, Sudan, Congo, Angola and others. Helping to stabilize the DRC is therefore in the long-term strategic interest of the United States.

Another area where Africa is gaining strategic importance to U.S. foreign policy is terrorism. The opening salvo of the Al Qaida reign of terror in the 1990s and early 2000s began with the bombing of the U.S. embassies in the east African countries of Kenya and Tanzania. Since then, several acts of terrorism have been perpetrated in a few countries around the continent, including Mauritania, Kenya and Somalia, usually targeting westerners and western interests.

While the scale of these attacks remain small compared to terrorist acts elsewhere in the world, this may change, particularly if poverty and hopelessness continue to take their toll on the minds of the largest segments of the African populations, i.e., the youth between 15 and 25 years of age. Helping to bring sustainable development and poverty reduction to Africa is therefore in the long-term U.S. national interest.

Of course, conflict prevention, promotion of sustainable development, poverty reduction, and restoring hope to the African people will only be possible if Africans themselves resolve to fight the rampant corruption that is plaguing the continent, causing tremendous hardships to its people, and to establish strong institutions for good governance. Such ideals are best attained within the context of a strong and sustained democratic system.

However, this is a choice that the African people must make for themselves. It cannot be imposed from abroad. The United States can use its influence to help such processes along, but ultimately it is incumbent upon the African people to decide how they want to be governed.