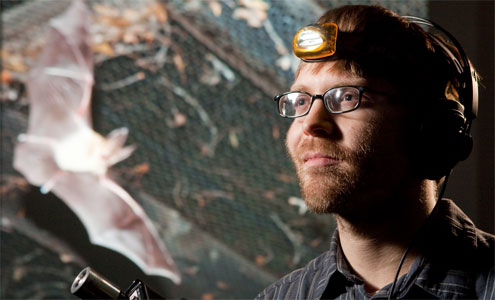 In the ongoing evolutionary battle between bats and moths, a species of tiger moth plays a trick with sound to avoid becoming a bat’s tasty treat, according to new research by professor William Conner and PhD student Aaron Corcoran.

“This is the first example of prey that jams biological sonar,” says Professor of Biology William Conner, who made the discovery with PhD student Aaron Corcoran.

In a series of experiments set up in a “bat cave” in the basement of Winston Hall, Corcoran and Conner observed free-flying big brown bats hunting moths. High-speed infrared video cameras recorded the interactions between predator and prey. They also recorded the high-frequency sounds made by both the bats and the moths during each interaction.

When a tiger moth hears the sonar pings of a bat in search of prey, it clicks back using a paired set of structures called “tymbals,” Corcoran says. The high-speed, high-frequency clicks disrupt the bat’s echolocation cycle. Although they have yet to discover exactly how the jamming works, the sounds could mask the echoes that the bat uses to locate the moth. Or, it might blur the bat’s acoustic image of the moth so the bat can’t determine its exact location.

Their research was first published in Science and later reported in The New York Times, on National Public Radio and in other media outlets. Corcoran presented the findings at the Animal Sonar Symposium in Japan last summer, and he will speak at the North American Symposium on Bat Research in November.

Now, Corcoran is doing field research to learn more about how the sonar-jamming defense works in the wild. He has found the perfect place to study the ultrasonic battle of bats and moths in the Chiricahua Mountains of Arizona, where one in every three moths is a Bertholdia trigona, the species of tiger moth that uses ultrasonic clicks as a sonar-jamming defense. Many species of bats, including the one they studied in the lab, are also prevalent.

He is trying to figure out if the moths are using evasive maneuvering along with sound to evade capture. “Are they combining defenses or does sonar jamming work so well that they go along their way without making elaborate loops and spirals to avoid being eaten,” he says.