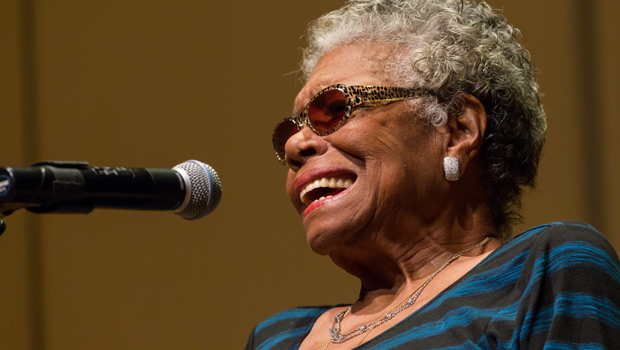 Award-winning poet, author and Civil Rights activist Maya Angelou encouraged a standing-room only crowd in Brendle Recital Hall to take individual responsibility for creating a community of kindness and respect.

With a mix of song and practical wisdom, Angelou suggested college students have much to offer in fostering a more civil society.

“When it looked like the sun wouldn’t shine anymore,” Angelou sang. Then she said, “Each one of you has the possibility, the promise, of being a rainbow in somebody’s cloud.”

When introducing Angelou, Provost Rogan Kersh recalled being a student in the first class she taught at Wake Forest. “We learned that dignity was not a matter of who your parents were or where you grew up,” he said. 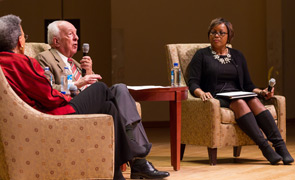 The Office of Diversity and Inclusion launched the campaign on Oct. 7 to unite the campus under the core belief that everyone deserves dignity and respect. Wake Forest is among the first to join the national movement, originally established by the Center for Inclusion at the University of Pittsburgh Medical Center. The campaign promotes inclusion through behavioral and organizational change.

Nearly 2,000 members of the greater Wake Forest community have taken the Dignity and Respect pledge.

“I would love for the whole campus to get involved with this,” said Sarah Lane, a sophomore from Coral Gables, Fla., who supports the campaign and was excited to hear Angelou address this timely issue.  “It should be an everyday conversation, something everyone’s talking about: ‘How can we further acceptance?’”

The event, which was free and open to the public, also featured Dr. Johnnetta B. Cole, director of the Smithsonian Institution’s National Museum of African Art, and Dr. Edwin G. Wilson, provost emeritus at Wake Forest.

The willingness of three “living legends” to take part in the conversation shows the importance of this topic, said Barbee Oakes, assistant provost for diversity and inclusion and an organizer of the event.

From partisan divisions in Washington to social media incivility, the speakers shared how to focus more on commonalities than differences.

“It seems so simple—and it is. When we treat others simply as we wish to be treated, it is the most revolutionary act a human being can commit,” said Cole, who also served as president of Spelman College and Bennett College for Women.

The polarization of politics

Wilson, who was Dean of the College when Wake Forest made the historic decision to admit its first black student in 1962, had some bipartisan advice for politicians and students alike.

“We need leadership that looks beyond race, beyond sexual orientation, beyond all trappings of our society. We need leaders who look at the hearts and the minds of our people and believe that America is destined for something more than name-calling and criticisms. I think if we can do that, maybe we can rise above our separations and work together for something better than we have known.” 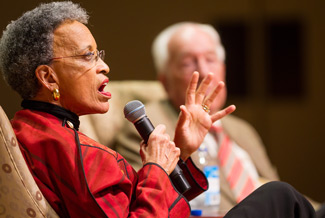 Johnnetta Cole, director of the Smithsonian Museum of African Art, talks about the Golden Rule

A recent report on Civility in America found that incivility had reached what researchers called “crisis proportions.” Seventy percent of those surveyed thought the Internet encourages uncivil behavior and 34 percent of those who expect civility to worsen blame Twitter specifically.

Cole reminded the audience that although the instantaneous nature and vast reach of Twitter and Facebook can make it easier to share hateful ideas, the power of social media can also be harnessed for good.

“With the same rapidity, we can also say loving things about each other,” Cole said. “Let’s not put all of the blame on the instrument. Let’s understand that we have to take responsibility for how we use that instrument.”

“Looking around this room, regardless of what you look like, what group you identify with, or what ethnic religious or racial box you check on standardized forms, we are all multicultural. Every single one of us runs the risk of being misunderstood, misrepresented and mistreated. That is why we have to treat everybody around us with dignity and respect.”