The future of self-driving cars seemed all but inevitable — until a fatal crash in Arizona last month prompted tech companies, automakers and lawmakers to pump the brakes.

For Wake Forest University’s first cohort of engineering students – who explored the intersection of safety, ethics and regulation of self-driving cars this semester – the accident underscored a tragic and timely question.

When it comes to an autonomous vehicle’s decision-making, how could a self-driving car choose the “best” course of action?

“We put so much of our trust into technology and it can actually endanger human lives.” Erin Fowler, first-year engineering student

Fowler is a first-year student who plans to become a psychiatrist and develop technology to help those with mental health issues. “I found it very interesting how much we had to think about self-driving vehicles in the context of ethical frameworks. It emphasized the importance of the decision-making programming.”

Faculty in the Department of Engineering took a new angle to the team-teaching approach they began last semester when developing the group projects for Engineering 112: “Introduction to Engineering Measurement and Analysis.”

Media are invited to attend the final class gathering of the semester on Friday, May 4 at 9:30 a.m. at Wake Downtown. TV crews may need to supplement with self-driving car b-roll.

The class of 52 students registered in three sections. Each section rotated through a series of three different projects to help them understand how everyday engineering decisions impact real people.

One project led by associate professor Michael Gross, in collaboration with emergency medicine clinicians in the Wake Forest School of Medicine, asked students to consider the transport of injured athletes on long spine boards versus on stretchers with a goal to minimizing movement (spine immobilization) and pressure. 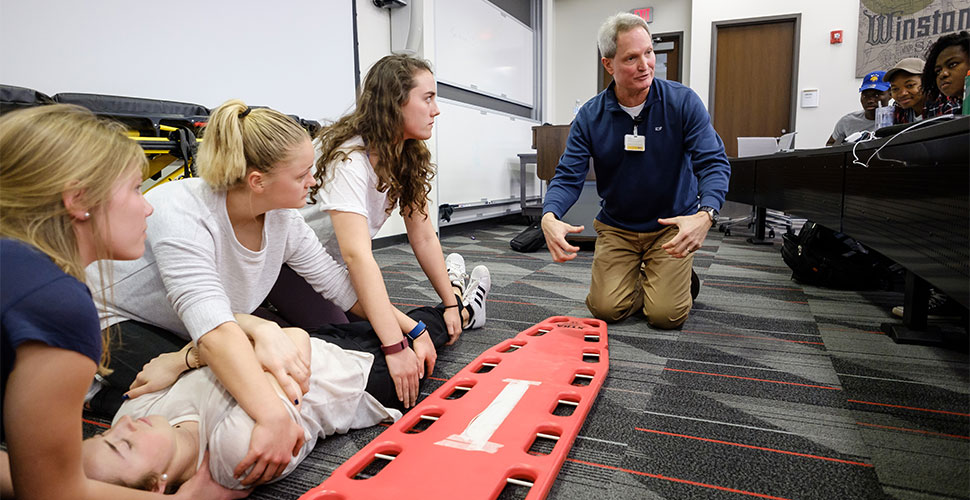 “All of the projects this spring were really focused on habits of mind around deconstructing complex problems and using engineering fundamentals to tackle those problems.” Elise Barrella, assistant professor of engineering 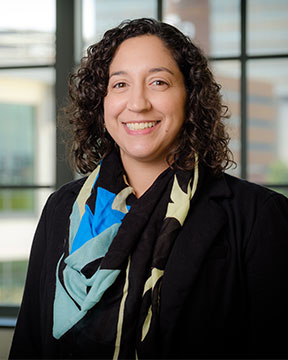 “I see the students gaining better information literacy skills, breaking down problems into manageable chunks, learning how to manage these short-term complex problems in a team, and communicating their findings in writing,” Barrella said.

Barrella led the students through the self-driving car project. Based on the initial problem statement, she helped students map out how they would approach the problem together. They investigated areas of inquiry, identified key milestones, and completed the final deliverable – a mock white paper prepared by the North Carolina Department of Transportation for the Joint Legislative Transportation Oversight Committee describing how self-driving cars would make decisions during crash scenarios in comparison to human drivers. 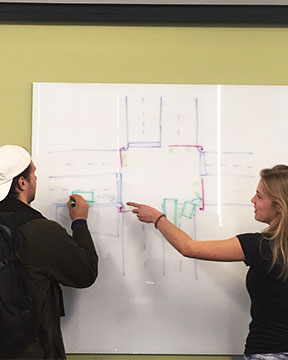 “When I wrote the prompt, it wasn’t an actual request, but it is typical of a quick-response assignment for engineers working with a state agency,” said Barrella. “One reason we focused on North Carolina instead of globally was because of the fact that states are driving discussions of how and what to regulate. The federal government has given them leeway to make these early decisions for now with high-level guidance. So, a big question is, is that the right approach or should there be some consistency across states?”

Fowler’s group kicked the tires of 10 scenarios a self-driving car might face with an object in the center of a busy, urban road – a scenario that doesn’t stray too far from the recent accident in Arizona. Students in her group made a flow-chart (below) to present options for how the car could be programmed to react depending on various circumstances. In the end, the vehicle could react in ways that include keep going, braking abruptly, swerving left or right, or even doing a U-turn. 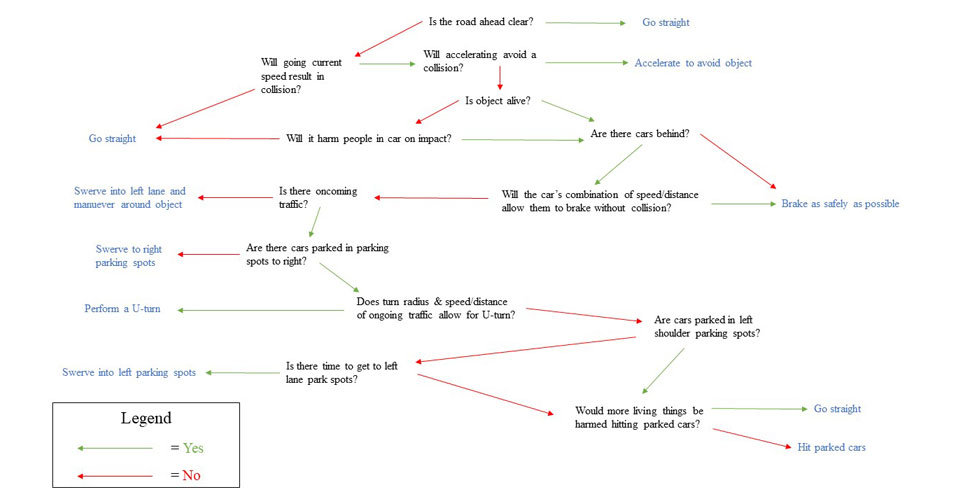 “When I looked at other engineering programs, you had to take this set course, then you had to learn about dynamics here and physics there. It’s STEM all the way through,” said Fowler, who is from Stone Mountain, Ga.

“When I learned Wake’s engineering program was going to be project-based, hands-on and innovative, that drew me in. It’s very much a real-life scenario and that’s what we’ll be working with as professionals. It’s not just solving math problems.” Erin Fowler, first-year engineering student 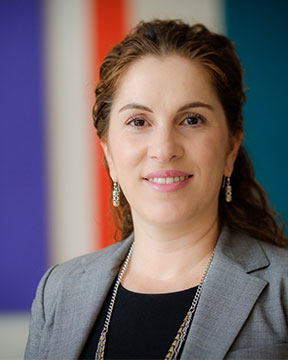 “The first-year experience at Wake Forest’s engineering program is about developing internship-ready engineering students who can begin to contribute to our society not at the end of four years, but by the end of year one,” said Olga Pierrakos, founding chair of engineering.

Pierrakos said the departmental commitment to the liberal arts is also evident at the four-year curricular level.

“Our students are combining engineering with interests in environmental studies, biomechanics, entrepreneurship, music, computer science and psychology,” said Pierrakos. “That’s a very different mindset than traditional programs. Our students are finding their own way to truly embrace the complete experience of what a Wake Forest education offers.”

“There are few things as simple and commonplace as a chair — unless Wake Forest University’s budding engineers have anything to say about it.” Read the Winston-Salem Journal story about engineering students’ creative uses of cardboard and check out the photo gallery below. 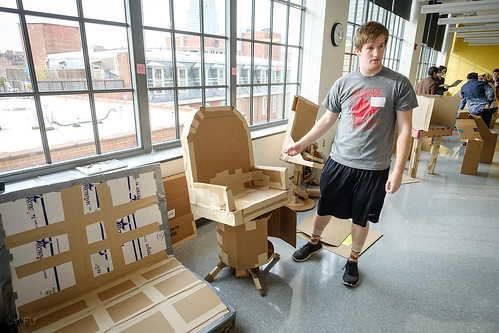 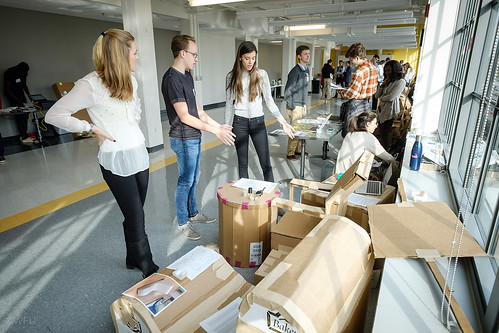 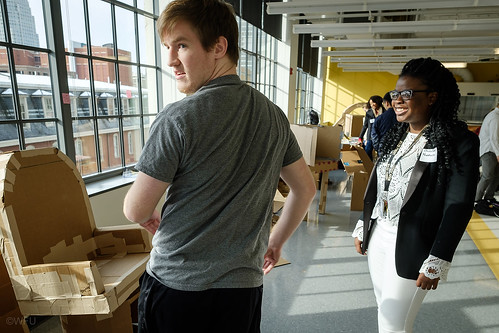 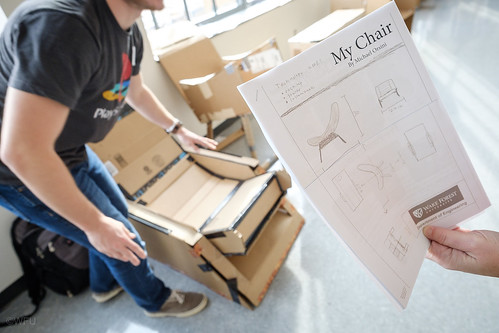 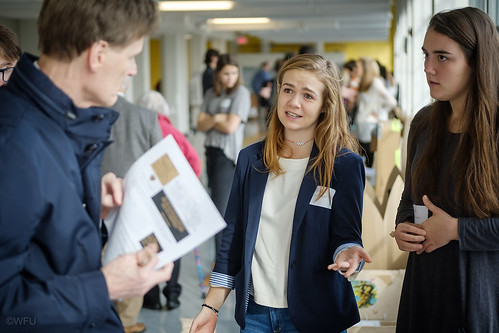 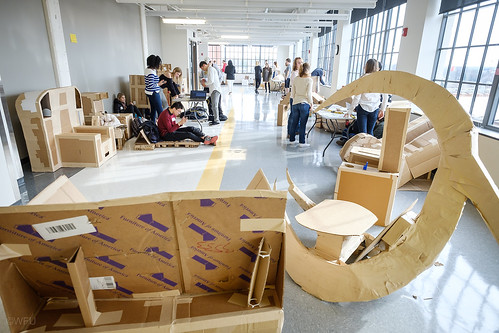 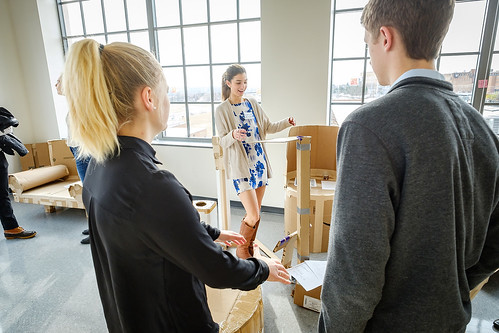 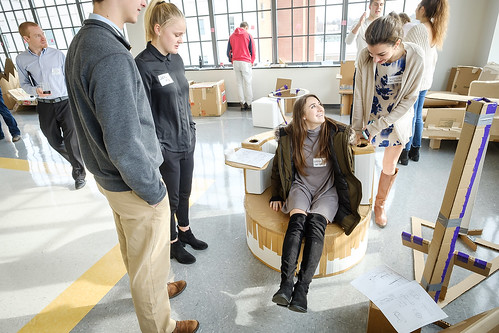