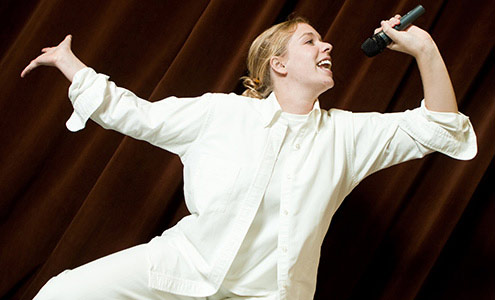 Senior Jennifer Malarkey plays Michi Barall, one of the characters in the Wake Forest Theatre production of “Sonnets for an Old Century.” The play, by José Rivera, is a theatre and dance collaboration featuring characters transitioning between life and the afterlife.

Why should people come to see this play?

“Sonnets for an Old Century” awakens the senses, allowing you to feel and appreciate the beauty of life and art. The beauty of José Rivera’s words, and the creativity of the cast and crew come together to create something that is really special. Through the stories told by the freshly dead, we ironically sense the life of these characters. It is a show packed with all sorts of emotions and tonalities while remaining hopeful, positive and playful.

What’s your story in the play?

I play an astrophysicist fascinated by the bigger questions of the universe. She is a fun, quirky, curious and extremely intelligent woman. As a child she had an out-of-body experience while playing in her backyard. Never being able to forget that moment, she finds excitement in the fact that she may be able to find the answers she’s been seeking in the afterlife.

What’s the most challenging part of your role?

First off, it is an eight-minute monologue, so the task of an eight- minute solo narration can be daunting. However, the words of Rivera feel so natural and have helped to make the process from page to stage seemingly unforced. Besides that, the show is very physical and relies on a lot of movement and dance. Although I have taken dance and movement classes, it is challenging to have intense rehearsals for hours each night. At the same time, this form of creative work is very rewarding for me as I am able to combine both dance and acting into one fulfilling project.

How did you create your character?

There are many different layers to Michi Barall, as well as different elements to the story that is being told. The theatre and dance professors directing the play, Cindy Gendrich and Christina Tsoules Soriano, have challenged me to find these layers and search for a balance that best creates this character’s world. In particular, Professor Gendrich had me draw on my personal experiences in rehearsal to help create Michi. To really delve into a character, actors do extensive background work, creating the character’s life history, and basically adding the breath to the character as she or he transitions onto the stage.

Do you have a mentor in the theatre department?

I feel spoiled to say that I have more than one mentor, but it’s true. The faculty each have their specialty area and are excited to share what they know. For example, I have a mentor for light design, an academic mentor, a mentor for my senior project where I’ll direct a one-act play, and a mentor who is supporting me in my renewed interest in dance. The theatre department is a positive environment, and there is constant support and encouragement from the faculty. I feel comfortable approaching any of the professors when I need guidance.

Did you draw from other classes to help you prepare?

What are your post-graduation plans?

“Sonnets for an Old Century” has really opened my eyes to the collaborative nature of theatre. Theatre work relies heavily on teamwork. We have been talking a lot about this in my development and performance class where we research different theatre companies while also creating our own work. I have become fascinated by the company environment and would love to continue this work outside of school.