Students reach out to serve those in need 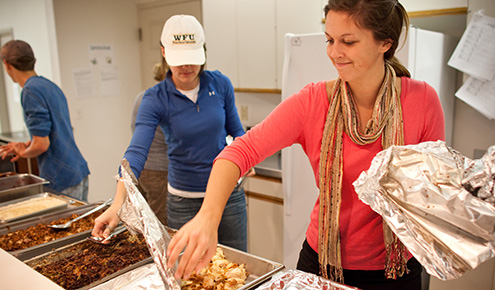 The program grew out of a Wake Forest project called Homerun, started in 1999 by then-juniors Karen Stephan Borchert and Jessica Jackson Shortall. The students took donated food and cooked meals for the elderly, infirm and other area residents in need.

Borchert and Shortall joined forces with the D.C. Central Kitchen to launch the Campus Kitchen Project in 2001. Campus Kitchen uses cooked, but never served, food from campus cafeterias to create meals for those in need in their communities. Currently there are 20 Campus Kitchens in operation across the country.

“It makes so much sense, we have all this extra food,” says Bachman. “We’re not buying food; we’re taking food from the Pit that would just be thrown out.”

On many days, Bachman says students sit down and share a meal with the people at the community agencies where they deliver food. “The end goal is to open the doors to communication. We’re another support system, we don’t just drop off the food and leave,” she says.

The Campus Kitchen at Wake Forest is entering its fourth year in operation. Campus Kitchen coordinator Shelley Graves (MA ’09) says about 50 to 75 students, along with some faculty and staff, volunteer each week, picking up donated food, cooking meals and delivering roughly 300 meals.

The project has expanded this year in two ways. First, Campus Kitchen partnered with the volunteer-led Campus Garden on Polo Road to grow local, fresh produce. “It’s great to have fresh produce rather than opening a can,” says Bachman. “Were making better meals for the people we’re serving.”

Campus Kitchen is also making classroom connections as professors partner with the organization to create service-learning projects for their students. Students in Angela Hattery’s Sociological Research Methods class are conducting a survey of student attitudes about access to local and seasonal food on campus and in the community. Students in Pat Lord’s Biology and the Human Condition class in the spring will work in the Campus Kitchen, preparing food they’ve helped harvest from the Campus Garden and preparing health education materials.

The Campus Kitchen will expand in January, partnering with The Shalom Project and El Buen Pastor to create community gardens in the Old Town and West Salem areas of Winston-Salem. The project is funded in part by a $2,000 grant from The Campus Kitchens Project and The Corporation for National and Community Service. It will launch on the Martin Luther King Jr. Day of Service in January 2010.