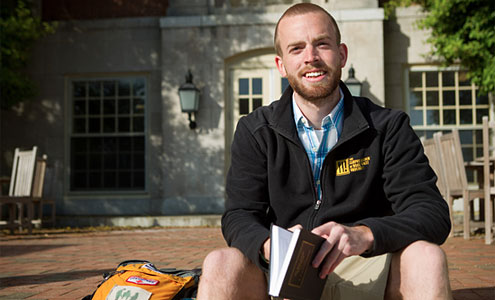 Wake Forest students have long been known for their commitment to the University’s motto, Pro Humanitate, and now an awards program has been established to formally recognize exemplary community service, whether it’s close to home or around the world.

The Pro Humanitate Honor Roll Program recognizes students who contribute a certain number of volunteer hours each semester. Service awards are given to the most outstanding students, each of whom receives a cash prize to donate to the non-profit organization of their choice.

The program is sponsored by Don Leonard (’65), a member of the University’s board of trustees. “I was especially interested because we obviously honor our athletes and we give special recognition to our scholars. But when I asked the question, ‘Does anyone recognize those students who give so much time and energy to community service?’ I found that, with the exception of a few awards, Wake Forest did not have a mechanism for recognizing a large pool of students invested in service.”

The idea for the initiative came out of a meeting of the Student Life Committee of the board of trustees, Leonard said. One of the proposals from students was to create a system to recognize student-service work.

Leonard, a real-estate developer based in Myrtle Beach, S.C., can’t even recall the first time that he volunteered his time to help a charitable organization. But he knows what he’s gotten out of volunteering.

“I have really benefited more than the people that we’ve served because I’ve developed so many good friendships,” he said. “I feel like I’ve gotten a lot more out of it than I’ve put in.”

Leonard is currently chairman of the South Carolina Transportation Infrastructure Bank, an unpaid position on a board that selects and helps finance major road projects.

Students who participate in the program sign up through the honor-roll website so that activities can be recorded and validated. Students who contribute more than 50 hours of unpaid service in a semester are placed on the Pro Humanitate Honor Roll.

Once a student has earned a spot on the honor roll, he or she can be nominated for a Service Excellence Award. Service awards are given to an outstanding male and female student in the first-year, sophomore and junior classes. Recipients receive a $500 prize to donate to the nonprofit organization of their choice.

The Christman Award, established several years ago in honor of Chaplain Ed Christman — who retired in 2003 after 49 years of service to the University — is now part of the honor-roll awards program. It is given to a senior in recognition of his or her contributions of service over their four years. The winner receives a $500 award and another $750 to donate to the nonprofit organization of their choice.

This year’s winners are:

Warr served in leadership roles with Presbyterian Student Fellowship and Campus Kitchen and volunteered with Crisis Control and Wake Saturdays. He also volunteered with the Orphanos Foundation in Honduras and Mother Teresa’s Missionaries of Charity in Calcutta, India. He spent the fall 2008 semester volunteering with a missionary group in Haiti.

Briggs served as a shift leader for Campus Kitchen, an ambassador for admissions, and as a leader in the University’s Catholic community.

Martinez was a founding member of the Wake Up! group on campus and developed a website that helped raise over $9,000 for Kenya Kids campaign. She spent her spring break in Port-au-Prince, Haiti, working with orphaned children.

Ganzon was a member of the Volunteer Service Corps and planned several service projects as the co-chair for the service committee. He also held several other leadership roles on campus and was a SPARC (Students Promoting Action and Responsibility in the Community) leader last summer. He also planned and led a Wake Alternative Break to Chicago to volunteer with Casa Central over spring break.

Kim volunteered with BigBrothers/BigSisters in Winston-Salem. He also volunteered at Casa Central during the Wake Alternative Break trip to Chicago.