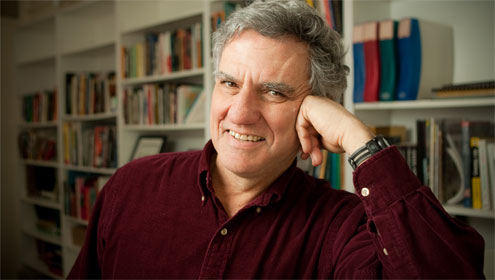 Brunette, who was 66, died of an apparent heart attack. He is survived by a sister, Rose Dean.

An expert on Italian cinema, Brunette joined the faculty in 2004 as Reynolds Professor of Film Studies and director of the film studies program, which started the same year.

“This is a huge loss to the Wake Forest community,” said Dean of the College Jacquelyn Fetrow. “He was the model of a Reynolds professor, an interdisciplinary scholar, nationally and internationally known, with a love of teaching and ability to bring his expertise into the classroom and engage students.”

Brunette was a fixture at international film festivals including Cannes, Berlin, Toronto and others. He was spending the summer in Europe attending various film festivals and attended the Taormina Film Festival for The Hollywood Reporter. He was a frequent contributor and film reviewer for The Hollywood Reporter and indieWIRE, an online news site for the international independent film community.

“He had written widely about Italian and French film,” said Professor of Music Peter Kairoff. “He was a national figure in the field as a scholar of film. He wasn’t really a reviewer of film, but rather he discussed film as an art form, addressing a film or director in the context of the history of the whole genre.”

Brunette joined the Wake Forest faculty after teaching for nearly 30 years at George Mason University, where he first taught English and later cultural studies and film studies. He also taught briefly at the Sorbonne in Paris and at the University of Maryland. At Wake Forest, he had a joint appointment in the departments of art and communication.

“He was lively, dynamic and always engaged in life and in his research,“ said Professor and Chair of Art Page Laughlin. “He was engaged in visual culture, but brought a different perspective to it because of his connection to film studies. He enjoyed teaching critical theory and I told him I personally would like to sit in on his seminar because his students got so much out of it.”

Brunette was scheduled to spend the fall semester teaching Italian cinema and Italian literature at Wake Forest’s Casa Artom house in Venice. Kairoff, director of the Casa Artom program, said he was a perfect choice to teach there. “He was a warm hearted and outgoing person who loved Italy. His family background was Italian. He spoke Italian fluently and was quite at home in all things Italian, especially Italian cinema. He was widely read, loved music and food, and was passionate about art.”

Even though Brunette was a well-known film scholar and critic, he loved teaching and was looking forward to spending the semester in Venice, Kairoff added. The University was notifying students who were scheduled to study there this fall and identifying other faculty members who could take Brunette’s place. “He talked often about his students and courses, and he especially loved Wake Forest students,” Kairoff said. “When he came to Wake Forest, he said the students were so bright and energetic, and he enjoyed getting to know them.”

Alex Saks (’09), who founded the Reynolda Film Festival, run by students, turned to Brunette for advice when starting the festival in 2008. “He took such an interest and wanted to foster the love of film. Without his help, advice and constant encouragement, I doubt we would have done what we did with the Film Festival,” she said.

Brunette graduated from Duquesne University in 1965 and received his masters there in 1967. He received a PhD in English and film from the University of Wisconsin in 1975.

He was the author of several books on filmmakers, including, most recently, “Michael Haneke,” a biography of the Austrian director. He was working on a book on Italian filmmaker Luchino Visconti. He had also written books on filmmakers Roberto Rossellini, Michelangelo Antonioni and Wong Kar-wai, and he was the editor of the filmmaker interview series of books at the University Press of Mississippi. He also served as a commentator on numerous DVDs.

“Peter was such a wonderful man, a dear friend and a wonderful colleague,” the film festival’s artistic director, Deborah Young, told The Hollywood Reporter. Scott Macaulay, writing in Filmmaker, said Brunette “was an extraordinarily kind and generous man.”

Although Brunette studied art films — films intended to be serious artistic, not commercial works — he said in a March interview on the Wake Forest website that he wasn’t against blockbuster movies, he just wanted his students to also look at art films.

“People should watch art films for the same reason they should read Virginia Woolf as well as Tom Clancy. These are films that have power and stay with you and can teach you something about life. Watch them for the same reason you would go to a museum to look at Vermeer. Don’t get me wrong. I like pop culture too. I watch the TV show ’24’ like a hawk and I loved ‘The Sopranos.’ But, there is a place for films that challenge preconceptions … for films that explore the meaning of being human in an important way.”