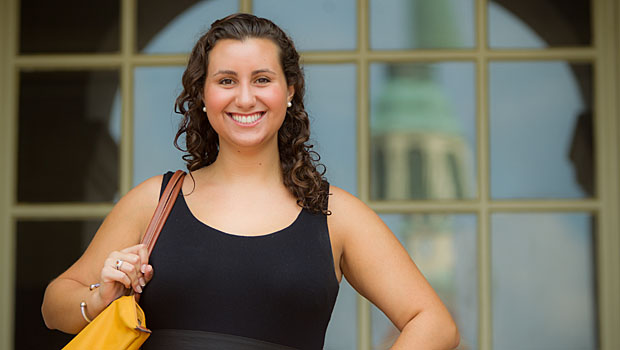 Senior Natalie Halpern, from Marietta, Ga., is a political science major earning minors in global trade and commerce studies and communication. Leading people and helping get projects accomplished is something she says she “truly enjoys,” and she has the track record to prove it. Halpern has participated in student government at Wake Forest since her freshmen year. She has served as the co-chair of Hit the Bricks (a university-wide cancer fundraising event), the New Member Educator of her sorority, a LEAD mentor, a SPARC pre-orientation program leader, an admissions tour guide and a member of the 1834 student giving campaign.

When did you first become interested in student government?
I became involved in student government in middle school when some of my classmates suggested that I be the class representative. After taking eighth-grade civics, politics really started to interest me. My family and friends have always said that I have a personality that makes me a natural leader, but they don’t know if I am tough enough for politics outside of school governance, so I guess we will see!

What do you view as the best new developments on campus?
One big accomplishment is the growing success of the Deacon Express shuttles that carry students from campus to BB&T field for home football games. It’s rewarding to know that a student government initiative is well received. I know this is the case when I see shuttles filled with students headed to the game on Saturday, and crowds of people walking to the buses to take advantage of them.

Another success is the building of The Barn, a new facility under construction for on-campus social events. It was part of my platform, but I knew construction was contingent on so many factors outside of my support. When I got the news that The Barn would, in fact, be coming to campus within the year, I knew that the administration was really listening to student leaders. The Barn is truly a collaborative success story.

What new initiatives are underway?
This year, we have reintroduced the Experimental College—where students teach unusual and fun classes that are not offered through the regular curriculum. We have five students teaching four classes on things like Lady Gaga, human trafficking, Harry Potter, and musical theatre dance. Aubrey Sitler, who is a member of the academic committee of the student government was passionate about bringing back this idea that was popular at Wake Forest in the 1970s—and knowing what it is to be passionate and go after something, I was glad to support her.

How will you reach out to students this year?
My goal is to improve communication with the student body though social media, the student government website and WAKE TV. Now that I’ve been elected, I want to be held accountable, so I plan to offer ways for students to provide me with feedback on my progress as the year continues.

What are your plans after graduation?
I would love to have a career that combines my love of communication and politics. I’m optimistic about my future even though I have no idea what it’s going to hold. Right now, however, I’m just trying to focus on my senior year and not let it slip by too quickly.