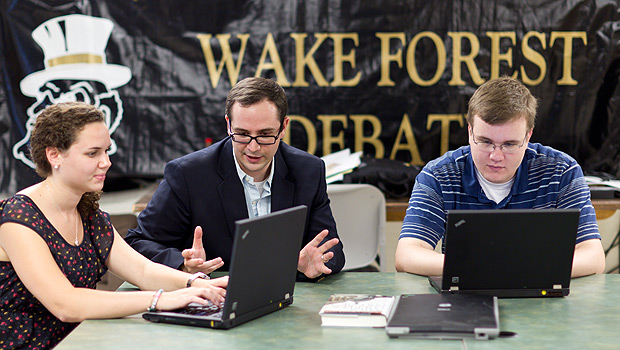 When it traded hard copies for digital files this fall, Wake Forest also became the first top-tier debate team in the country to go “open source” and share all its evidence and arguments online through a wiki accessible to other debaters.

Both changes will make the university’s already nationally competitive teams stronger and shape the future of collegiate debate, says Jarrod Atchison, who was named Wake Forest’s director of debate in July.

Paperless vs. paper is among the hottest issues in collegiate debate. About 25 schools have moved to the paperless model in the past two years. This spring, a New York Times story highlighted Wake Forest’s success using the traditional paper approach. But, Atchison said the time is right to make the change. He is convinced that the skills that helped Wake Forest win in the past will not be lost as the team shifts to the new computer model.

The real benefit to debaters, says Atchison, is “we are training them in skills they’ll need to have when they leave Wake Forest for graduate school or a job…the ability to navigate vast amounts of information using technology.” 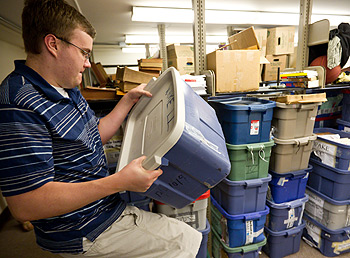 The cost savings of traveling with a half dozen laptops instead of 50 Rubbermaid tubs filled with files is an added bonus.

“At the beginning, I couldn’t imagine going paperless,” said junior Michael Carlotti, who received a first round bid to the National Debate Team last year with his well-organized paper files. “But, I haven’t even thought about looking back. Paperless debate has really streamlined the process by saving us all the time we would normally spend printing files. Everything from file organization to travel and even moving between rooms at debate tournaments has become much easier.”

Carlotti has continued his success with the new model. This fall, he and his partner, Andrew McCarty, were ranked 10th in the country in the Debate Coaches poll.

The move to open source is more radical than going paperless, Atchison says. “This action is unprecedented in collegiate debate; it will allow all to see how one of the premier programs in the nation develops evidence and organizes that material into arguments and cases on the national topic.”

Each year, debate programs across the country vote to select a “resolution” that will be debated that year. The 2010-2011 topic relates to U.S. immigration policy and eligibility for visas.

The online sharing of information is an experiment that he predicts will lead to higher quality arguments in debate competitions around the country.

“The old model rewarded who could find an article, book or journal that no one else had,” he says. “With the new (open source) model, everyone has access to the resources and the focus is on how to use the evidence to produce the best possible argument. Open source, therefore, encourages argument innovation with evidence that is currently available, while still maintaining an incentive to research new positions.”

Knowing your arguments will be posted for review will raise the bar and help Wake Forest debaters get even better, says Atchison, a Wake Forest graduate who was the top seed at the 2001 National Debate Tournament. “They’ll have an extra sense of pride in what they produce because it will be available for others to see.”

“When all of our arguments are posted for everyone to see, we need to keep researching newer, better arguments to keep other teams on their toes,” Carlotti says.

Richard Min, a freshman on the debate team, says open source debating “is also a public service, because having our research out for everyone can help smaller and/or newer debate programs to participate.”

Because scanning documents is so time consuming, posting all evidence and arguments online following each debate would be virtually impossible without converting to competing with electronic files. The paperless approach and the leap to “open source” have to go hand-in-hand, Atchison says.

Reducing the debate team’s environmental footprint is another benefit of moving away from paper.

“I’m glad we can do our part in helping the environment,” Min says.

The discarded pages were recycled and the expandable files were donated to the Urban Debate League.