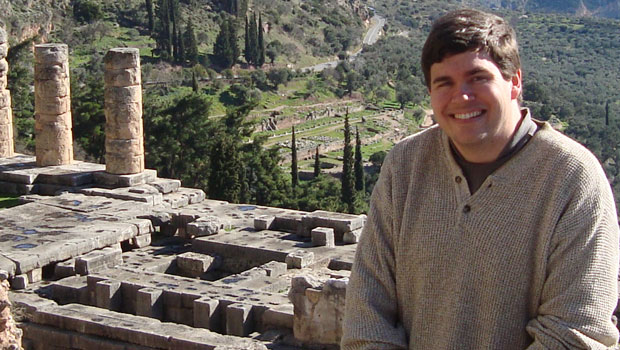 In January Christian Miller, associate professor of philosophy, traveled to Athens, Greece, where he and another U.S. scholar spent two weeks discussing ethics and morality with 14 Chinese philosophers in a seminar on the Foundations of Morality.

The seminar was part of the “Values and Virtues in Contemporary China” program funded by the John Templeton Foundation and based at Calvin College in Grand Rapids, Mich. Miller, who co-taught the seminar with philosophy professor Mark C. Murphy from Georgetown University, led discussions designed to introduce his Chinese colleagues to the latest Western research on morality and how human beings learn the difference between right and wrong.

Forty years ago, there were few opportunities for Chinese and Western philosophers to share research or engage in discussion, but all signs point to more cooperation in the philosophy world, Miller says. “It was great to see that what we do as philosophers has relevance worldwide, regardless of perceived cultural differences.”

Though the main goal of the seminar was to bring the Chinese philosophers up to speed on Western philosophical arguments, Miller says the discussions with his Eastern counterparts revealed that philosophy can reunite what social mores and customs might seem to divide. He hopes to highlight this lesson by incorporating more material from Chinese traditions into his classes.

“It’s not that either Western or Eastern approaches to philosophy are better,” says Miller. “It’s that sharing ideas and resources helps us to see how philosophers in traditions other than our own search for truth. My Chinese colleagues care about many of the same questions I care about and because of this we were able to identify key issues and have meaningful discussions.”

As part of the outcome of the conference, each of the Chinese scholars will write a paper on a seminar topic to be presented at a follow-up conference in Wuhan, China, in October 2011, where Miller and Murphy will be the keynote speakers.

Miller is a Zachary T. Smith Faculty Fellow. His expertise is in contemporary meta- ethics and moral psychology with a focus on character and social psychology. He has been awarded a $3.67 million dollar grant for The Character Project, a three-year research initiative to study the existence and nature of character. He is working on completing his first book, “Moral Character: Philosophy and Psychology.”