The value of mentorship 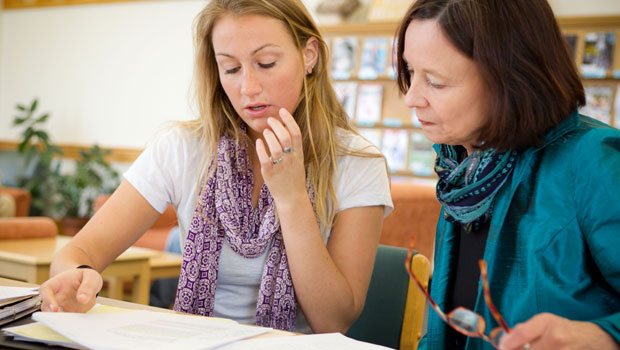 For nearly 20 years, Professor of Political Science Helga Welsh has been reaching out to students as a partner in education — embracing a concept of learning that pairs classroom work with mentoring relationships.

“I would not be where I am today, had it not been for teachers who served as important role models and mentors,” says Welsh, who joined Wake Forest in 1993. “I think my own educational background instilled in me the desire to reach out to students.”

Welsh, who teaches courses in comparative politics with an emphasis on European politics as well as a class that explores the intersection between politics and literature, says she finds small class sizes facilitate open discussions. They also provide her with opportunities to recognize her students’ interests.

At Welsh’s invitation, Sara Olson, a sophomore political science major, has been compiling research, comparing and contrasting various approaches to transitional justice taken in Central and Eastern European countries – research that will help Welsh revise a paper she presented last year at a conference in Montreal. Olson has enjoyed the chance to work collaboratively with her professor while reaching her own goal. “During this same time, I’ve been working on an independent study on this same topic, with Dr. Welsh as my adviser,” explains Olson. “At the end of the semester, I will turn in a 20-25 page paper on transitional justice and the rule of law that I hope my professor will be able to use for her work. I feel very privileged to have had Dr. Welsh as a mentor this semester, and I hope to continue to work with her for the rest of my time at Wake Forest.”

Welsh’s guidance may begin during the Wake Forest years, but it doesn’t necessarily end with graduation. Susan Battle, a 2000 Wake Forest graduate, credits Welsh for laying the foundations that helped her decide to explore religion and ultimately led her to a career in ministry. Battle says that foundation began with Welsh helping her and other students in her class understand how one event is connected with another and with the world. It also included time spent outside of the classroom talking with Welsh about everyday things. “Dr. Welsh invests herself in her students not because she wants them to follow in her footsteps into political science, but because she cares about them personally.”

“Students engage with faculty members for different reasons, and the forms of interaction vary,” Welsh says. “Ideally this communication provides guidance for a student’s personal and academic development. When mentorships work, they are rewarding to the student and the educator. I hope that I make it clear to my students that I am here to be a partner in those relationships.”

Welsh received the Jon Reinhardt Award for Distinguished Teaching in February 2011 at the University’s Founders’ Day Convocation. The award recognizes an experienced member of the College faculty as a distinguished teacher in the broadest sense of the word, one who exemplifies the ideals of a liberal arts education and emphasizes the importance of mentoring relationships.