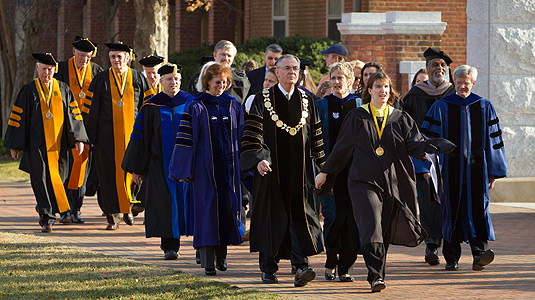 What is Founders’ Day Convocation? »

“Building Bridges at Home and Abroad”
Catherine (Cate) Berenato (’11)
English major; Blacksburg, Virginia
“If Wake Forest is to live up to its reputation as a preeminent national institution, we must demonstrate the “Pro Humanitate” spirit in each and every aspect of our community. We must continue to build bridges, not just to foreign countries, but to those who seem like foreigners in our midst. For the greatest knowledge is not solely learned in textbooks, but is enhanced and developed through our everyday interactions with all members of our Wake Forest family.”
Read more »

“Application for the Class of 2011”
Ashley Gedraitis (’11)
English major; Peru, Illinois
“The challenges that Wake Forest has placed before me have undoubtedly made me a stronger, more capable human being. That is possibly the biggest testament to Wake Forest – it does not just turn out accounting majors, psychology majors, or English majors. It produces wholly educated individuals. And for that, Mother So Dear, I would like to thank you.” Read more »

“To Understand the World …”
Ava Petrash (’11)
Sociology major; Kensington, Maryland
“Reflecting on my almost four years here in Winston-Salem, I have come to realize that the ‘Wake Forest bubble’ is a myth. This place catapulted me out into society. It challenged me to create my own path and supported me as I shaped my worldview. As I prepare to spend the next year teaching in a low-income charter school in inner-city Boston, I am fully aware of the numerous gifts that my education has given me.” Read more »

Medallion of Merit
Life trustee Wayne Smith (’60) received the University’s highest honor, the Medallion of Merit. Smith served four terms on the University’s Board of Trustees, including two years as chair, before being named a life trustee in 2010. He has also served on the Medical Center Board of Directors. Smith had a distinguished career in government, as director of program analysis for the National Security Council, and in business, as CEO of World Book, Inc., and Online Computer Library Center. In 1992, he established a scholarship for Wake Forest students, and he has occasionally taught courses in economics, politics and business. “Dr. Smith’s exceptional record in education, politics and business, and his tireless efforts to share that success with others, serves as the best reflection of the hopes and dreams of the founders of Wake Forest.” said President Nathan O. Hatch.
Read about Vin Yang (’09), a K. Wayne Smith scholarship recipient »
Past Medallion of Merit winners »

Reid-Doyle Prize for Excellence
Associate Professor of English Jessica Richard received the Reid-Doyle Prize for Excellence in Teaching. Richard joined the faculty in 2002. The award recognizes a faculty member in the College in the early part of his or her career. The award was established in 1971 and renamed in 1986 in recognition of the generosity of the late Wilbur Doyle who endowed the prize to honor his philosophy professor, A.C. Reid.
Read more about Richard »
Read more about the award »
Past recipients » [PDF]

Donald O. Schoomaker Faculty Award for Community Service
Professor Emeritus of Political Science Jack Fleer received the Donald O. Schoonmaker Faculty Award for Community Service. Fleer joined the faculty in 1964 and retired in 2002. The award was established in 1988 by the Wake Forest Alumni Council to recognize extraordinary community service of a respected teacher-scholar from the College or the Calloway School of Business and Accountancy. The award is named in memory of Professor of Politics Donald Schoonmaker.
Read more about Fleer »
Read more about the award »
Past recipients » [PDF]

Bill J. Leonard Distinguished Service Award
Assistant Professor of Urban Ministry Douglas Bailey (’60) received the Bill J. Leonard Distinguished Service Award Pro Fide et Humanitate. Bailey, who joined the Divinity School faculty in 2002, is also the founder of the Center for Urban Ministry. The award is named for former divinity dean Bill Leonard and is given annually to an alumnus, faculty member or friend of the divinity school who embodies the principles of Pro Humanitate.
Read more about Bailey »
Read more about Bailey’s recent work »
Read more about the award »
Past recipients » [PDF]

Joseph Branch Excellence in Teaching Award
Professor of Law Ahmed Taha received the Joseph Branch Excellence in Teaching Award. Prior to joining the law school faculty in 2002, Taha was an attorney in the Antitrust Division of the U.S. Department of Justice. The award was established in 1985 to honor Chief Justice Joseph Branch upon his retirement from the North Carolina Supreme Court. Recipients are chose on the basis of outstanding teaching and service to the legal profession.
Read more Taha »
Read more about the award »
Past recipients » [PDF]

Marcellus E. Waddill Excellence in Teaching Award (Secondary)
Amy Talley (MAEd ’06), a Spanish teacher at Ashley Elementary School in Winston-Salem, received the Waddill Excellence in Teaching Award on the elementary level. Melanie F. Huynh-Duc (MAED ’05), who currently teaches 9th grade English and journalism at Northwest Guilford High School in Greensboro, N.C., received the Waddill Award on the secondary level. The award was established in 1994 in honor of Marcellus Waddill, professor of mathematics from 1962 to 1997, and funded by his son David.
Read more about Talley and Huynh-Duc »
Read more about the award »
Past recipients »