Can a video game cure cancer? 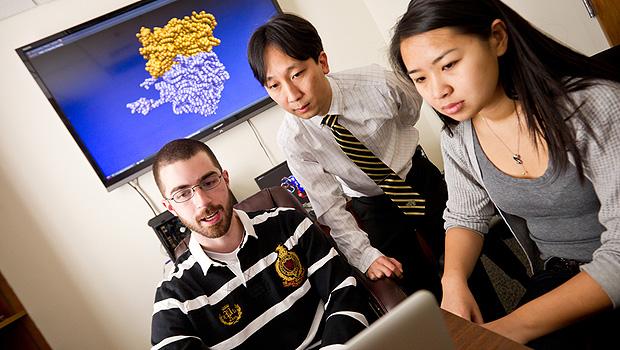 Anqi Zou (’12) never thought she would thank video gamers for showing her the way to exciting discoveries in molecular biology.

But here she is, acknowledging that the technology she uses to show the inner workings of cells was originally perfected to create realistic images on gaming screens worldwide.

No matter. Sam Cho and his students are using graphics processing units – also called GPUs or graphics cards – to explore the biomolecular processes in the cell and take on challenges, including a cure for cancer.

“We have hijacked the same technology that creates the detailed gaming scenes on your computer screen to perform molecular-dynamic simulations,” Cho said.

Zou and Lipscomb recently presented their competitively selected research posters on molecular dynamics simulations at the NVIDIA GPU Technology Conference at San Jose, Calif. About 3,000 scientists, engineers and developers from 54 different countries attended the conference, which enabled Zou and Lipscomb to meet the top scientists doing cutting-edge research in their fields.

They also met with some executives at NVIDIA, the world’s leading manufacturer of GPUs, which remains committed to repurposing video game technology for computational science, such as in their work here at Wake Forest.

Zou is helping Cho push the limits of GPU-optimized cell simulations. This Mathematical Business and Computational Science major is comparing the data provided by GPU and non-GPU simulations.

“Because of the powerful computational ability of these GPU devices that are usually used for gaming, I couldn’t help registering for Dr. Cho’s GPU programming course,” she said. “Halfway through the semester, I was much impressed by the computational performance of the GPUs, and I approached Dr. Cho about working on a research project related to GPU programming.”

For his most recent published study, Cho, an assistant professor of physics and computer science, simulated the folding and unfolding of a critical RNA molecule component of the human telomerase enzyme. This enzyme lengthens DNA strands during cell division and only exists in cancerous cells. It’s what makes tumors continue to grow.

His research findings appear in the Journal of the American Chemical Society.

Now, Cho and his research assistants are looking at a much larger cell system – the bacterial ribosome – to see what they can uncover through GPU-optimized molecular dynamic simulations. The graphics cards were donated by Nvidia, the company that invented the GPU; Cho developed a new GPU programming course so he could teach Wake students how to use the cards.

The benefit of the GPU-optimized simulations is that they are much quicker to perform. The ribosome simulation, for example, would take more than 40 years on a standard computer. Using GPUs, Cho and his students will see results in a few months.

The end goal is to map the ribosome’s functions so researchers can develop antibiotics to specifically kill bacteria.

And that would be an amazing accomplishment, thanks in large part to videogamers, Cho said.

“If it wasn’t for gamers who kept buying these GPUs, the prices wouldn’t have dropped, and we couldn’t have used them for science,” he said.