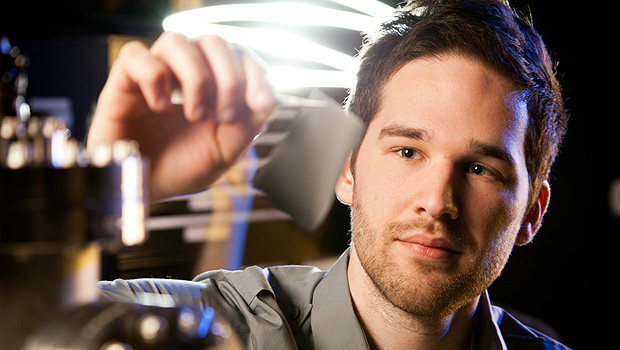 You know it’s been a banner year when your technology is named first on The New York Times Magazine’s list of “32 Innovations That Will Change Your Tomorrow.”

Developed in the Center for Nanotechnology and Molecular Materials, Power Felt has generated national attention as a breakthrough thermoelectric device that converts heat differences into electrical currents.

The possibilities of Power Felt have been featured in hundreds of news outlets, including TIME, CNN, Mashable, Popular Science, Bloomberg Businessweek, The Atlantic, Yahoo! News and Discover Magazine. Learn more.

For one species of seabird in the Galápagos, the child abuse “cycle of violence” found in humans plays out in the wild.

The new study of Nazca boobies by Wake Forest researchers provided the first evidence from the animal world showing those who are abused when they are young often grow up to be abusers.

“We were surprised by the intense interest that many adults show in unrelated young, involving really rough treatment,” said Professor of Biology Dave Anderson, who led the study. “A bird’s history as a target of abuse proved to be a strong predictor of its adult behavior.”

The study appeared in the October print edition of the ornithology journal, The Auk, and national media outlets such as The New York Times, Discover Magazine, BBC Nature, Science Daily and The Charlotte Observer. Read more.

According to their study published in the New England Journal of Medicine, weight loss and increased physical fitness nearly halved the decline in mobility in overweight or obese adults with type 2 diabetes.

Rejeski says the weight loss and physical activity goals in the study are well within the reach of most Americans, and someday could have public health policy implications. Reuters, U.S. News & World Report, WebMD, The Chicago Tribune, and Daily Rx reported on the research. Get moving! Learn more.

4. Can a video game cure cancer?

Samuel Cho, an assistant professor in physics and computer science, and his students use graphics processing units found in video games to explore the biomolecular processes in the cell and take on challenges, including a cure for cancer.

For his most recent published study, Cho simulated the folding and unfolding of a critical RNA molecule component of the human telomerase enzyme. This enzyme lengthens DNA strands during cell division and only exists in cancerous cells. It’s what makes tumors continue to grow. Knowing how human telomerase works could lead to cancer therapies that essentially obliterate tumors, Cho said.

WIRED, The Charlotte Observer, PhysOrg and WGHP were among the news outlets to cover this compelling research. Read more.

Computer science graduate student Michael Crouse (BS ’10, MS ’12) and his faculty mentor, Associate Professor Errin Fulp, have applied biological design principles to develop innovative ways of thinking and address modern-day challenges. When addressing the ever-changing and growing concern of cyber security, nature is their blueprint and biology is their inspiration.

They are fighting the continual evolution of viruses, worms and malware with evolution. Together, they have developed the first-ever automated computer configurations that adjust as quickly as the threats. – leveraging the concept of “survival of the fittest.”

Fast Company prominently featured BioBook, a next-generation e-textbook that improves the way college level biology is taught and learned, which was developed by an interdisciplinary team of Wake Forest faculty.

Meet Jessica and Tiffany Blackburn, rising juniors who have combined their interests in science and art as integral members of the BioBook team.

USA Today called Atala a “cult figure in 3D printing” for his groundbreaking research on printing human organs.  NPR’s All Things Considered interviewed him about new promising signs related to stem cell research. He spoke to CNN about immune-suppressing drugs. And Esquire named him one of the “75 Most Influential People of the 21st Century.”

In February, Atala was one of 18 speakers talking about technology, social impact and entrepreneurship, at TEDxWakeForestU, in keeping with the TED mission of “Ideas Worth Spreading.” The Huffington Post called Atala’s TED Talk on “Printing a Human Kidney” one of the best of 2011 and the BBC highlighted it on its homepage. Watch it.

8. Research with an impact

Identifying and diagnosing sports concussions quicker is at the heart of a collaborative effort between biomedical researchers at the Virginia Tech-Wake Forest University Center for Injury Biomechanics and Toyota Motor Corp. The center has licensed the Total Human Model for Safety (THUMS) software from Toyota as a new strategy for studying head injuries involving football players.

The collaboration has been featured recently in Toyota’s television commercials and received widespread national news attention. Read the ESPN story

Every two seconds, someone in the U.S. needs blood. But depending on the amount and age of the stored blood used, transfusions can lead to complications including infection, organ failure and death. New research from Wake Forest and the University of Pittsburgh School of Medicine found that these complications are likely due to red blood cell breakdown during storage, implying that transfused blood may need to be stored in a different way.

The team, which included Daniel Kim-Shapiro, Director of the Translational Science Center, published findings from its ongoing exploration of the interaction between red blood cell breakdown products and nitric oxide, revealing new biological mechanisms that can reduce blood flow and possibly damage vital tissues after administration of blood that has been stored for longer periods of time.

Plastic-based flexible electronics, produced in large volume using roll-to-roll processing, inkjet printing or spray deposition, is the “electronics everywhere” trend of the future, says Oana Jurchescu, assistant professor of physics. And the key to success in this market will be the low-cost production of large molecular structures with excellent electronic performance.