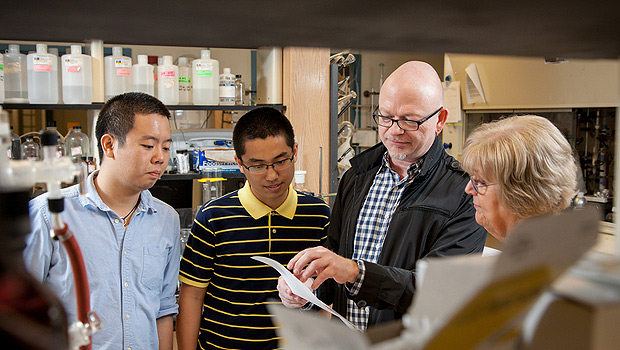 When Linda Tuttle was diagnosed with breast cancer, she never imagined her experience would inspire her colleagues to design new treatments to tackle the disease.

A staff assistant in the chemistry department, Tuttle was more accustomed to talking to faculty and staff about meetings and course loads – not doctors’ appointments and treatment plans.

But after her 2009 diagnosis, Tuttle’s use of tamoxifen, a drug commonly used to treat breast cancer, inspired medicinal chemist Uli Bierbach and graduate students Song Ding and Xin Qiao to develop a targeted therapy that delivers a sneak attack to the disease – similar to a Trojan horse – in the spirit of Pro Humanitate.

Current platinum-based drugs, such as the blockbuster drug cisplatin, do not work on the most common and most difficult-to-cure types of cancer, including lung and breast.

Building upon more than a decade’s work in platinum-based drug research, Bierbach’s team now designs synthetic hybrid molecules that more effectively tackle otherwise chemo-resistant cancers, including breast cancer. Results of this work, funded by the National Cancer Institute at the National Institutes of Health, appear in the September 13 issue of the Journal of Medicinal Chemistry.

Results also have led to tumor-seeking magic bullets that attach platinum to endoxifen, a close relative of tamoxifen, and quietly hitch a ride to the diseased cells, as if hidden in a Trojan horse.

“Platinum-based drugs cause severe damage to the DNA in cancer cells. Unfortunately, most cancers are smart enough to cut out the DNA damage and repair it, and that’s the starting point for our structural design. We developed a compound that does a good job therapeutically by overwhelming the ‘damage repair police’ of the cell,” said Bierbach, a chemistry professor who recently completed a four-year term with the California Breast Cancer Research Program.

Bierbach said that instead of killing certain cancer cells, cisplatin causes kinks in the DNA strand, which prompt cell enzymes to repair the damage. Wake Forest’s new platinum-based molecule has a much higher affinity for DNA than cisplatin and twists it in a way that is not easily identified by the cancerous cell.

In partnership with Greg Kucera of the Comprehensive Cancer Center at Wake Forest Baptist Medical Center, initial preclinical studies have proven Bierbach’s army of molecules to be 500 times more powerful than cisplatin in treating non-small cell lung cancer, 80-100 times for pancreatic cancer and up to 10 times for breast cancer.

“Within the next two years, we hope to turn our platinum-based drugs into safer, targeted warheads by attaching them to vehicles that will take them to a specific type of cancer and act as a guided missile,” he said.

Hope on the horizon

Offering a safer way of delivery will be an important step in convincing industrial partners and the Food and Drug Administration (FDA) to move forward with clinical testing, which Bierbach estimates could be another three to four years away. Still, he and Tuttle remain encouraged given the progress to date.

For nearly three years, they met several times a week to explore Tuttle’s treatment options, discuss possible side effects, and defuse her fears.

“My grandmother had breast cancer. We were even the same age when we were diagnosed,” said Tuttle. “Now every time I have a strange pain or a headache, I can’t help but wonder if I have another tumor.”

But unlike her grandmother, whose late stage breast cancer metastasized, Tuttle’s cancer was only stage 1 when a routine mammogram detected it. Today she is in remission following a lumpectomy and radiation therapy, and her quality of life has improved.

Though her prognosis looks promising, she and Bierbach still get together frequently in the halls of the chemistry department to share stories – hers of how she now lives every day to its fullest, and his of the lab’s progress with its challenging research projects.

“Our professional relationship has definitely grown,” said Tuttle. “I hope his research group stays as focused as it is now. Every advancement helps.”

“Wake Forest’s motto is Pro Humanitate, which means ‘for humanity,’ and it motivates our research group daily,” Bierbach added. “Everyone knows someone who has been affected by cancer, and there’s a pressing need for more effective and less toxic chemotherapies. The solution starts with some combination of academic curiosity and personal experience, and takes place in a lab that has synthetic chemistry expertise and a good deal of imagination to think about new ways to tackle cancer mechanistically at the molecular level. It’s a fulfilling job, but it’s even more rewarding to help someone you know.”