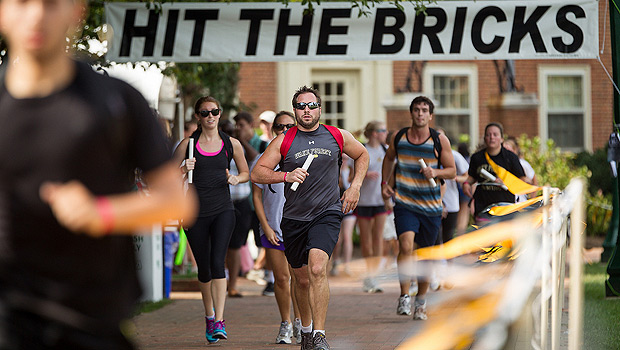 Every autumn, as the leaves begin to fall from trees planted on Hearn Plaza, this beautiful college quad comes alive with the hustle and bustle of students, faculty, and staff.  Each one is here to contribute their lap to a growing total in the fight against cancer.

The event is Hit the Bricks — an on-campus race that takes place in the shadow of Wait Chapel.

This year was the 10th anniversary for one of the most popular activities on campus. Hundreds of students, staff, and faculty turn out to lend their support every year. If there was ever a definitive list of Wake Forest traditions, Hit the Bricks would find its place among rolling the quad and Project Pumpkin.

When Hit the Bricks began in 2002, it raised about $3,000 and had only a handful of teams participate. Last year, the competition raised more than $26,000 and had 89 teams enroll. While every lap each team contributes is vital to the success of this event, the student organizers say support received from those outside the Wake Forest community is just as necessary.

Top 5 finishers in each division

“While it’s great to see staff, students, and faculty members turn out to race, it’s important to recognize parents and members of the community who often pledge their financial support,” said co-chair Aline Souza (’13).

The major function of Hit the Bricks is to raise funds for charity. All proceeds support cancer research at the Wake Forest University Baptist Medical Center’s Comprehensive Cancer Center. While Hit the Bricks turned 10 this year, the Brian Piccolo Cancer Research Fund dates back to 1980 and has raised more than $1 million for the WFU Cancer Center. These funds primarily go toward research and patient care.

“The donations we receive from Piccolo events fund our primary operations,” said Lori Osowski, director for the Comprehensive Cancer Center.  “But telling prospective employees about the fund and its purpose helps attract talent to the team.”

Brian Piccolo attended Wake Forest in the early 1960s on a football scholarship, eventually winning the ACC Player of the Year as a senior. Unselected in the NFL draft, he tried out for the Chicago Bears as a free agent, and slowly worked his way up the ranks until he earned a position as a starting fullback in 1969. Halfway through the season, he began showing symptoms of poor health, was diagnosed with embryonal cell carcinoma, and passed away a year later.

This year, the competition was larger than ever as the 93 teams and 951 participants set a record.

“We learned a lot from past events, and we were prepared to accommodate additional teams,” said co-chair John Allen Riggins (’14).  With Hit the Bricks scheduled just before parents weekend, organizers also planned for additional support from both the Wake Forest and local community.

Student speakers took the stage to discuss their experience with cancer and explain the need for additional cancer research. President Nathan O. Hatch and Provost Rogan Kersh also participated in the event. Hatch walked an honorary lap with student leaders at the start of the race, and the team named in Kersh’s honor came in second in the faculty/staff division.