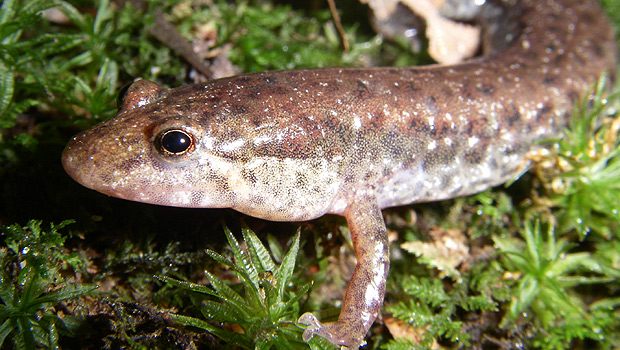 On the heels of one the worst U.S. droughts in more than half a century, a new study conducted by Wake Forest biologists raises questions about the future of one of the most integral members of stream ecosystems throughout the Southeast – the salamander.

Five years of research, which now appears in the scientific journal Herpetologica, shows how salamanders and other aquatic animals might react to drought, shedding light on the impact of climate change and urbanization on salamander populations.

“Unfortunately, the heat is on for the amiable amphibian,” said Robert Browne, a biology professor who oversaw the research, which was conducted with collaborators from Davidson College.

Steven Price’s journey to Winston Hall evolved differently than most students’. Working as research coordinator at nearby Davidson College, he wanted to pursue his Ph.D. at Wake Forest while retaining his position at Davidson and conducting research in the Charlotte area.

“He said, ‘I’d really like to get my Ph.D. and here’s what I’d like to work on,’” said Robert Browne, who served as his adviser. “Steve really ran with the ball, working with local developers and getting permission from county commissioners, and set up a great study. His before and after control designs are top-shelf in terms of ecological experimentation.”

Price, now an assistant professor in the department of forestry at the University of Kentucky, said the support of several Wake Forest faculty members made him a better researcher and ecologist.

“I chose Wake Forest because of its excellence in environmental and ecological research. Bob Browne, Miles Silman, Dave Anderson and Cliff Zeyl mentored me in different ways and I took classes with all of them. They really challenged me and because of them, I am a much better scientist and professional in this field.”

Steven Price, a graduate student in Browne’s lab, studied the Northern Dusky Salamander at 17 sites in the Charlotte-Mecklenburg County, N.C., area from 2005 to 2009, which included 12 months of exceptional drought (Sept. 2007 to Sept. 2008).

While adult salamanders had 90 percent survival rates from one month to the next, their larvae, which must be submerged in water for development and metamorphosis, disappeared from an average 30 percent of sites during the drought year. When water levels in the areas observed reached a 110-year low, adult salamanders migrated from streambeds to underground or high-humidity refuges at twice the rate seen during non-drought conditions.

“With climate change models predicting that droughts will become longer in duration and more severe, having knowledge of animals’ response strategies to extremely dry conditions is critical to their future survival,” said Price, who now is an assistant professor of stream and riparian ecology at the University of Kentucky.

“During the drought, adult salamanders demonstrated a 90 percent survival rate from one month to the next. It sounds pretty high, but at this rate, less than one percent would survive a four-year drought suggested under certain climate change scenarios,” Price warned.

Salamanders play an important role in maintaining balance in a forest ecosystem. They feast on stream invertebrates that help regulate the nutrients derived from leaf litter in waterways. As prey for birds and mammals, their place in the food chain remains an important one.

“The Charlotte metro area expanded like crazy during the time of our research, and development, like drought, has a major impact on the fragmentation of habitats,” said Browne. “Protecting and widening the riparian buffer zones would not only provide them shelter during dry conditions, it would also prevent erosion and absorb silt, which negatively impacts the survival of stream-dwelling animals.”

Thus, drought may interact with local land-uses resulting in a particularly bleak outlook for salamanders and other semi-aquatic organisms.