A Google search for drug discovery 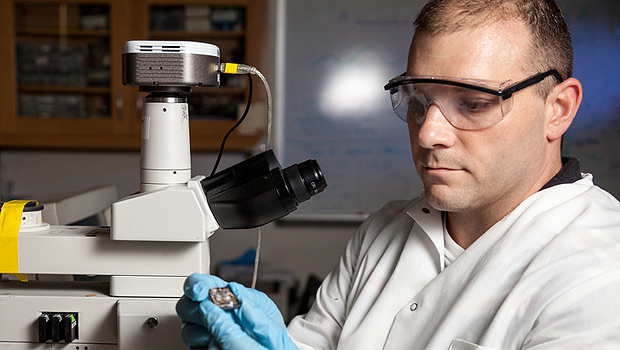 It’s what scholars dream about: getting to work with the latest technology and leading researchers in the industry to develop a scientific breakthrough.

For Jason Gagliano, a biology graduate student, it’s a reality.

Gagliano is part of the physics department team developing a technology called Next-Gen Lab-on-Bead. The tool uses next-generation genetic sequencing to make the drug development process thousands of times faster, much like a Google search.

“I usually just tell people I am trying to find new drugs for cancer,” he said.

The National Institutes of Health (NIH) has awarded the team a $700,000 grant to bring Next-Gen Lab-on-Bead to market. The NIH awarded the funding through its Small Business Innovation Research program, and Wake Forest will share the funds with partner NanoMedica, a Winston-Salem company that has licensed the patent for Next-Gen Lab-on-Bead. 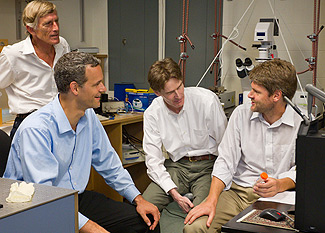 “We are using cutting edge technology that has only been on the market for about a year and a half,” Gagliano said. “We have an application for this technology that, as far as we know, no one else has thought of, which makes it exciting to explore.”

Next-Gen Lab-on-Bead uses a roughly one-inch-square chip, much like a computer chip. A football-shaped area in the middle of the chip is filled with millions of wells. Each well contains a bead, to which the researchers attach a potential drug molecule.

In 2010, NanoMedica relocated from New Jersey to Winston-Salem to be closer to Wake Forest researchers. In a recent article, the Winston-Salem Journal called the company “a poster child” for the potential of expanding Piedmont Triad Research Park.

“What distinguishes NanoMedica from other startup biotech companies is the level of university personnel involved in its development, business strategy and planning,” reporter Richard Craver wrote.

Stephen Susalka, Associate Director of Wake Forest’s Office of Technology Asset Management, points to the recently licensed technology as the latest example of what the Journal called a “blossoming symbiotic relationship.”

“At a time when federal research funding is being reduced nationwide, Wake Forest is fortunate to have such a strong, long-standing, and collaborative relationship with NanoMedica. We are excited about the advances Next-Gen Lab-on-Bead technology will bring to drug discovery, and ultimately, patient care,” Susalka said.

“We can do millions of sequencing actions in unison to find a possible drug to treat a specific disease,” Guthold said.

To find a disease-drug match, a pharmaceutical company would supply the target – for instance, the tiny protein called Src kinase associated with many cancers. The researchers would combine the protein with a neutral solution and flow it over the chip. This is the work Gagliano has been performing.

If a well glows, it contains a drug that is potentially useful in treating the disease. The drug company then can begin developing the drug and testing it in the lab.

Though the Wake Forest-NanoMedica research team has focused on drug discovery, Next-Gen Lab-on-Bead also could be used for more accurate, speedy medical diagnoses.

Gagliano said he has enjoyed participating in the partnership between Wake Forest and NanoMedica.

“The NanoMedica team is made up of brilliant scientists who are also really good people. Often times our strategic meetings go a little longer than expected because we are having too much fun while mapping out new strategies,” he said. “NanoMedica has a real noble philosophy of truly putting people before products, and collaboration before competition.”