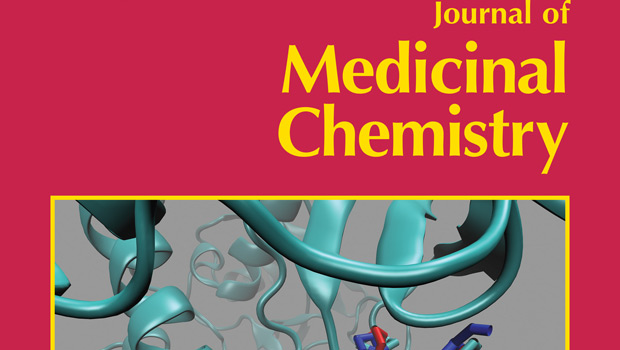 The work of a team of Wake Forest researchers developing a novel drug for prostate cancer treatment is featured on the cover of the Nov. 26 issue of the Journal of Medicinal Chemistry.

All cells, both normal and diseased, rely on the PI3K cell signaling pathway for growth, so inhibiting the pathway selectively for cancer cells has long been a challenge for scientists in the fight against cancer. While turning PI3K inhibitors loose in the body would prevent the spread of cancer, doing so would also inhibit growth in lots of cells.

To effectively use this strategy in the treatment of cancer, the Wake Forest team had to target these inhibitors to specific kinds of cells. Using prostate cells as the target, they selected a protein that is specifically recognized by prostate cells and attach that protein to a PI3K inhibitor.

“Most men over 50 are familiar with PSA, or prostate specific antigen, since elevated levels of that enzyme are markers for prostate cancer,” said Welker. “We made a cell growth inhibitor that had the PSA recognized protein sequence added to it. The idea was that this compound itself would be nontoxic, but when PSA split the inhibitor from the protein sequence, that would release the cell growth inhibitor onto the prostate cells.”

The concept has been proven to work in cells – good news, considering one in six American men will be diagnosed with prostate cancer during his lifetime, according to the American Cancer Society.

Prostate cancer cells treated with the cell growth inhibitor plus PSA recognized sequence died, while breast cancer cells, by contrast, were unaffected by it.

“Given that prostate cancer is the second leading cause of cancer death in American men, this research could signal a major breakthrough,” said Salsbury.

While these cell studies show promise in the treatment of prostate cancer, the team is awaiting grant funding to conduct pre-clinical trials.