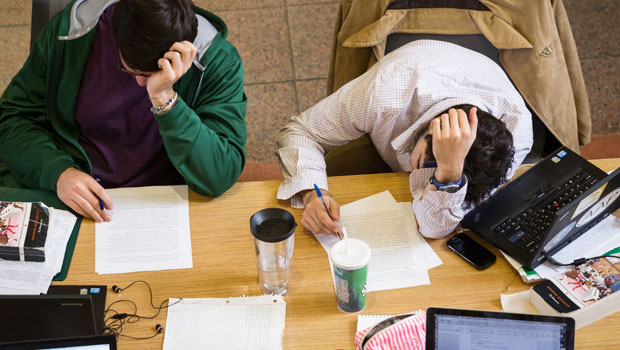 Historically, Wake Forest undergrads pass in and out of the Z. Smith Reynolds Library nearly 25,000 times during exam week. Working at tables, hiding in study carrels and sleeping on couches — the numbers are not that much higher than an average week. What is different is that students tend to stake out a spot and “camp out.”

To help with the long hours and anxiety of final tests and papers, the community comes together to offer some welcome breaks.

This year, the week-long study marathon began on Sunday, Dec. 9, with a free late-night breakfast for students. Faculty and staff carried trays loaded with pancakes, eggs and hash browns for students as they escorted them to their tables  nurturing them with kind words and support as much as with food. 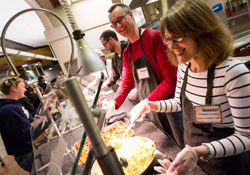 The late-night breakfast, held in the Reynolda Hall cafeteria, is a revival of the tradition started in the 1990s by the late Professor of Sociology Charles Longino, who every year recruited administrators, other faculty members and staff to serve a late-night breakfast to students during fall and spring semester exams.  After Longino’s death in 2008, the late-night breakfast ended until this year when Campus Life and Leadership renewed this opportunity for professors and members of the community to offer students some extra TLC during exam time. 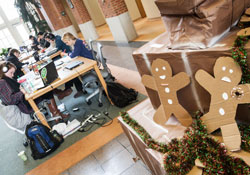 The library atrium is decorated for the holiday exam week.

“Wake the Library,” begun in 2006, motivates students through the last stretch of the semester with holiday decorations in the atrium designed by the top-secret library decorating committee.

The library provides midnight snacks each night of exam week — from burritos to chicken sandwiches to subs. Students find out what is being served each night through the ZSR Facebook page and @zsrlibrary using #wtl2k12. 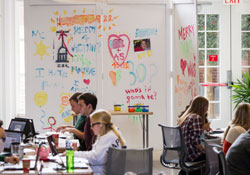 A graffiti board in the library atrium provides stress relief for the artistically inclined.

To reduce waste from the more than 2,000 cups of free coffee that will be consumed in the library during exam time, the Office of Sustainability collected both tasteful and tacky crockery from the Wake Forest community to give to students.

The library also hosts a “Cans for Fines” program — accepting canned goods as payments for overdue fines and encouraging students to remember that life is going on outside the library.

“Love is louder than…” 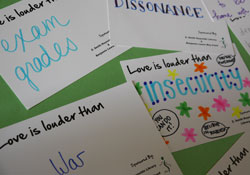 Postcards from the "Love is louder than…" project

Whether elaborately decorated or plain, the postcards collected by Wake Forest’s Gender Equality Allies (GEA) offer words of encouragement during exam time. The semester long “Love is Louder” postcard project began in September. Students, faculty and staff have been mailing anonymous postcards that complete the thought “Love is Louder than….” The campaign is an offshoot of the national Love is Louder campaign that offers supportive messages during difficult times.

Amy Shackleford, a junior from Orlando, Fla., spearheaded the project for GEA. “Our group felt that hanging the postcards in the library during exam week would be a good reminder for stressed-out students that there is life beyond studying for finals.”

The project is sponsored by the Z. Smith Reynolds Library and the University Counseling Center.