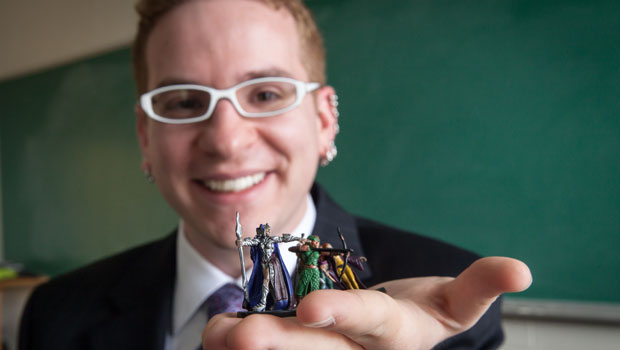 Choose your character, write spells, map the dungeon and move up levels. It sounds like Dungeons and Dragons, but it’s not. It’s Latin class.

Each student plays a hero from Graeco-Roman myth with a backstory, personality and actions determined largely by the student. Over the semester-long journey the players face obstacles, challenges and opportunities both independently and as a group.

And they learn to write Latin.

“The best way to learn a language is by immersing yourself in it,” says Ted Gellar-Goad, a post doc teacher-scholar in Wake Forest’s classical languages department who teaches the class. “And it’s even more fun in a world not quite our own, in time, place or nature.”

The first day of Latin prose composition class, the most challenging required course for Latin majors and often the dullest, the 12 students chose a character to guide through the 20 levels of the course. 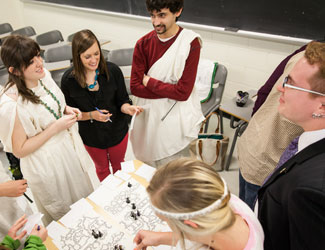 Students in Ted Gellar-Goad’s class ‘map dungeons’ while learning to write in Latin.

Templin says generally other women in the class were more hesitant to embrace role-playing than the men, something Gellar-Goad expected might happen. “But the class is not a video game, it’s a paper-based role-playing game, and its extrinsic value is to create increased engagement in the class. Something I think we’ve definitely accomplished,” he says.

“I look forward to the class, and I’m not constantly checking the clock,” says Templin. “Though I was initially intimidated by the set up, especially starting the class at level zero, I’ve noticed so much growth in my abilities. I’m looking at the dictionary less and less. That we craft our sentences according to our character and the motivations of game players is a big challenge, but so much more fun than translating the vanilla sentences someone else wrote from a 1940s textbook.”

Students earn experience points, not grades. They gain levels. They learn Latin in a “super-structure of fun,” says Gellar-Goad. This includes:

The idea for the course setup came from a Teaching and Learning Center book group on José Antonio Bowen’s “Teaching Naked: How Moving Technology Out of Your College Classroom Will Improve Student Learning.” Gellar-Goad was most interested in Bowen’s exploration of using games as a useful pedagogical tool. “The Multiplayer Classroom: Designing Coursework as a Game,” was another useful resource for course design.

As game master, Gellar-Goad moderates the class, provides the setting and helps guide both the storytelling and the adventures. Students work as a class to figure our how their player characters will respond to given situations. Gellar-Goad sets up the simulation: We are in a city in ancient Greece and the Mycenean people are rebelling against their queen. The rebels have caught you, and you have two options: Confess you are gathering information on how to defeat the Sphinx or hide your true motives. The group discusses the options and possible outcomes, and then composes sentences in Latin to move the game forward.

“One of the biggest takeaways for me from the class is that Dr. Gellar-Goad’s unique approach is inspiring students in our class who have different ways of learning,” says senior Matt Sherry, an aspiring high school Latin teacher. He encourages creativity and that creativity gives students different ways to approach learning.”