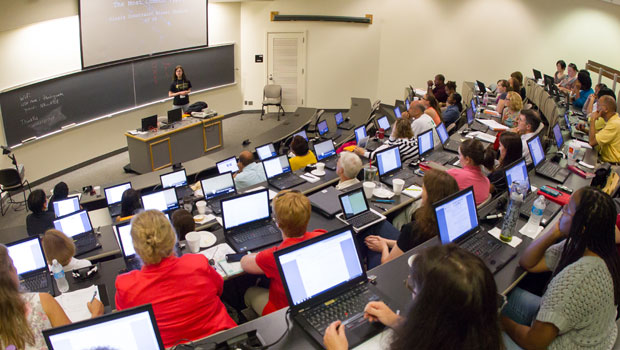 We all know how to use a computer program but how many of us can say we know how to write one?

Not many, which is strange considering the technology driven world we live in. In fact, less than 1 percent of all high school Advanced Placement exams taken in the United States are for computer science.

“This might have been ok last century but not in this one,” said Samuel Cho, an assistant professor of computer science and physics at Wake Forest. “Everyone ought to be able to read and write; few people would disagree with that. Considering the role computers and smart phones play in our lives, we think the same reasoning should be applied to computer programming.”

Cho and his colleague Paúl Pauca, an associate professor of computer science, are working with a team of high school, undergraduate, and graduate computer science students to reverse this trend. Aug. 12-13, they hosted the second Google-sponsored CS4HS workshop at Wake Forest for local middle school and high school teachers. The program’s goal was not only to teach educators the basics of computer programming but also how to apply computational thinking to all aspects of education. 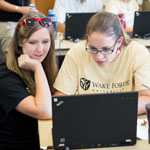 “Most kids don’t have the opportunity to learn about computer programming in the classroom before they set foot on a college campus,” Cho said. “We think the best way to change this is to help middle school and high school teachers realize that no matter what subject they teach, computer programming can be incorporated into the curriculum.”

This year, the number of educators in the workshop grew from 12 Hanes Magnet School teachers to 35 Forsyth County middle and high school teachers.  The participants learned how to write computer and Android-based programs with the help of Wake Forest professors and undergraduates.

“When I say computer programming most people think Bill Gates or Steve Jobs,” said Emily Hudspeth, a rising senior and president of the ACM student chapter, a computer science club here on campus. “We are trying to show the teachers participating in the workshop that programming tools like Scratch, developed by scientists at MIT, make creating a program as simple as dragging and dropping.”

Scratch is an educational programming language that can be used by almost anyone to create virtual lesson plans, animations and even simple video games. “Moving from these really simple drag and drop programs to something that has really impressive functionality gets to be intuitive with enough practice,” Hudspeth said.

Yu’Vonne James teaches Spanish at Hanes Magnet School. She attended the workshop last year where she learned how to make a simple educational game using Scratch. After the workshop, she said she had her students use Scratch to make review games that focused on particularly tricky topics. The students then took a day to play each other’s games.

“Everyone loved it, my kids remembered concepts better than students had in years past working with pencil and paper,” she said. “What’s more, they started asking me about how to make different programs for their other classes and just for fun.”

This year, James, other local-area teachers and several high school students participating in the workshop learned how to use a new program called App Inventor for Android. Hudspeth explained that App Inventor is an application originally created by Google but now developed by MIT that allows someone not particularly skilled in computer programming to create software applications for devices with Android operating systems.

Makenzie Whitener, a rising senior at West Forsyth High School, said working with the team of Wake Forest computer scientists gave her the opportunity to hone skills she’d like to develop into a career.

“I’m planning on spending the rest of my life working in computer science. I was offered the opportunity to do this and jumped right on it because I don’t really have any experience,” she said. “I thought this would be a good way to introduce myself to the field before I got into college.”

James said she is planning on using App Inventor to teach tricky verb tenses to her 12 and 13-year-old students.

“Most kids have Android devices. I think they will really enjoy making a program for their cellphones,” she said. “The great part about all of this is that by breaking down these concepts piece by piece and then putting them into a computer program, my students intrinsically know them way better.”