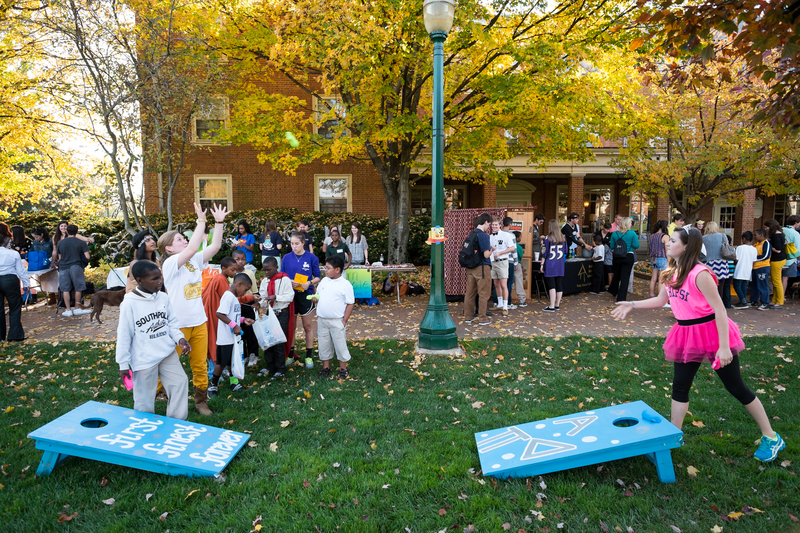 Blake Harrison knew before he graduated from high school that one day he would be “Head Pumpkin” of Project Pumpkin. Harrison, a senior health and science major from Marietta, Ga., heard from his older sister, Ashlyann (’09), about her volunteer experience with the annual Halloween festival and it became his mission to lead the student-run event. 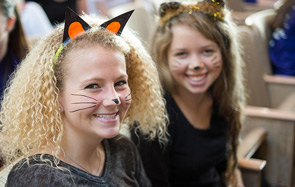 More than 800 community children from nearly 25 local agencies arrived on campus Wednesday afternoon with costumes and matching smiles to help celebrate the 25th anniversary of Project Pumpkin. At least 750 Wake Forest students volunteered, escorting trick-or-treaters around Hearn Plaza to the festive carnival booths sponsored by 70 different student organizations and academic departments. From cookie decorating to face painting to pie throwing, the activities on Hearn Plaza created an excitement that was felt across campus.

“Project Pumpkin has had a huge impact on Wake Forest and the surrounding community for 25 years,” Harrison said. “Wake Forest students have been, and will continue to be, committed to seeing this event expand and evolve over time. They volunteer each and every year to make sure these kids have a Halloween that they will never forget.”

The evolution of a campus tradition

It was during the SPARC pre-orientation program that Dianne Uwayo first heard about Project Pumpkin. Uwayo, a refugee from Rwanda, lived in an area of Greensboro, N.C., where it was unsafe for her to trick-or-treat. Now a junior sociology major, Uwayo’s goal is that local children have a safe place to celebrate Halloween.

“As a kid, I always wondered what Halloween was like and wanted to experience it,” she said. “Project Pumpkin gives the opportunity to kids who might not otherwise have a safe place to trick-or-treat. It is amazing to be able to have an impact on our community at this level and to see the incorporation of Pro Humanitate throughout the event.”

In the few weeks leading up to Project Pumpkin, dozens of Wake Forest students volunteered at four agency “plunges” to get the children excited for Project Pumpkin and to help them make decorations. This year’s theme was “Willy Wonka and the Chocolate Factory.”  As they arrived on campus the 150 children who participated in the arts and craft “plunge” searched for the “Golden Ticket” or Willy Wonka hat they had made.

Uwayo will be “Head Pumpkin” next year, but this year she acted as agency liaison. She helped to coordinate the four “plunges” and worked to grow the list of agencies involved.

The silver anniversary of the event prompted students to reflect on the history and future of the event, said Shelley Sizemore, assistant director of campus life and service. There were numerous discussions and conversations about what Project Pumpkin means to Wake Forest and the community and what the next quarter century could bring.

“Project Pumpkin has become a campus and community tradition, but to keep the tradition alive for another 25 years, we plan to evolve as the needs of the community change and keep the learning outcomes for our students a priority,” Sizemore said.