A new home for Campus Kitchen

Quinoa is on the stove, pineapple is being sliced and student volunteers are packaging individual meals for those in need in Winston-Salem, N.C.

Welcome to a Monday night cooking shift at the Campus Kitchen at Wake Forest.

A recipe for leadership

Oriana Wright, a senior biology major from Austin, Texas, has been volunteering with Campus Kitchen since her first-year. Wright was originally drawn to Campus Kitchen based on her volunteer experience in high school, but quickly fell in love with the passion and commitment of Campus Kitchen to the community. 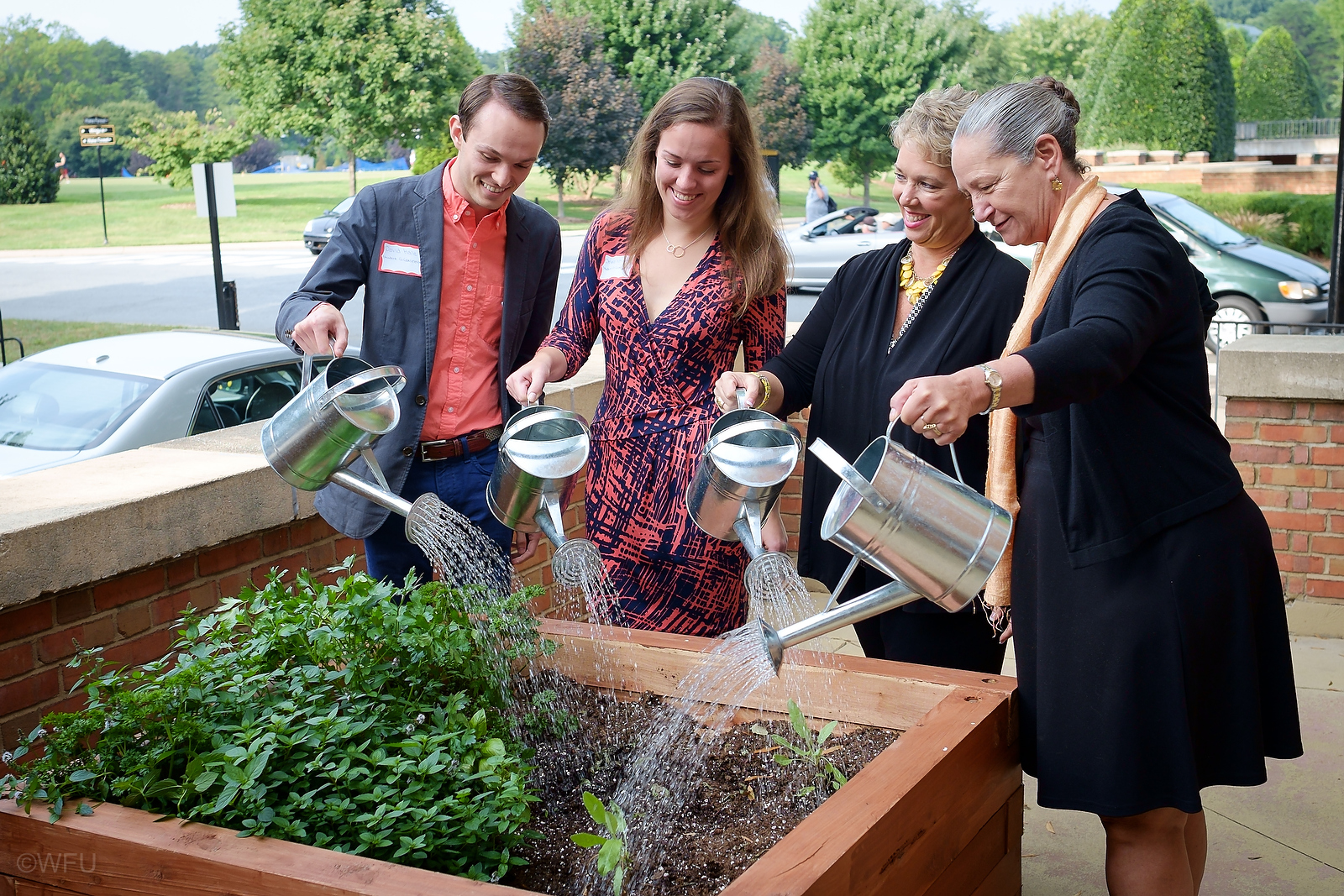 Campus Kitchen is a collaboration of students, faculty, staff, dining services, more than 10 agency partners and the Winston-Salem community. Through a strong partnership with Aramark, the campus dining service, Campus Kitchen reuses an average of 600 pounds of food per month to feed the underserved – food that is prepared, but never served and would otherwise go to waste.

“Campus Kitchen is the opportunity for Pro Humanitate to extend beyond the Wake Forest campus and bridge together the community,” Wright said. “It’s a reason to get off campus and serve those around us.”

Campus Kitchen by the numbers:

Wright credits Campus Kitchen for teaching her how to lead in a peer setting. Now serving a second term as a Campus Kitchen executive board member, Wright has honed her leadership style and learned the meaning of compassion, two invaluable skills she is grateful to take with her as she pursues medical school.

It was only a few days into David Hale’s first-year when he decided to try a Friday night volunteer shift at The Fresh Market, where Campus Kitchen volunteers rescue produce and other grocery items that would otherwise be thrown away. The student volunteers and staff made Hale feel at home, so he immediately volunteered for another shift. Hale has been with Campus Kitchen ever since.

“Everyone I have volunteered with at Campus Kitchen has encouraged and prepared me to lead,” said Hale, a senior biology major from Rising Star, Md. “Without Campus Kitchen, my eyes would not have been opened to my desire to serve those around me. Pro Humanitate continues to inspire new leaders across campus, who then have a positive impact on our campus and community. It amazes me to see the Wake Forest community come together for common good.”

A new space for creativity and community

Campus Kitchen has relocated from the Benson Student Center to a lounge in Kitchen Residence Hall. The new kitchen area includes an oven, two refrigerators, open cooking space and an executive board member office. The basement of the lounge will be used for gatherings and meetings, movie screenings, and educational workshops for students, faculty and staff.

Blair Bryce, a senior sociology major from Miami, Fla., has already seen the positive effect of the new space on the organization. From the addition of volunteer shifts to the increased visibility of the new lounge on campus, Bryce is grateful for the opportunity to lead on the Campus Kitchen executive board during his final year at Wake Forest.

“The new space has brought us closer together,” said Bryce. “Campus Kitchen is already a lively group, so the space better matches our personality. We have already made the lounge our own, and it is exciting to think of all the good that will come out of this new space and the people in it.”

Campus Kitchen has a rich history at Wake Forest. In 1999, Karen Borchert (‘00) and Jessica Jackson (‘00) started a student-run program called Homerun, a weekly food delivery service for those in need. Borchert went on to start the national program, “The Campus Kitchens Project.”

Officially opening its doors in 2006, the Campus Kitchen at Wake Forest has continued to grow every year since. The delivery service that Borchert and Jackson began in 1999 now consists of nearly 20 weekly shifts where students cook and deliver hot meals, and sort and redistribute produce across the greater Winston-Salem area.