Activism and the environment 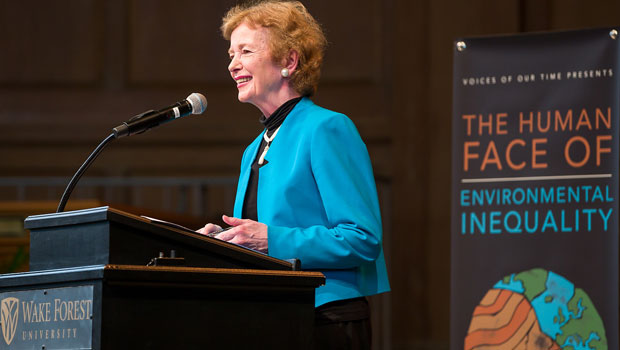 The need for change bulldozed a road down the center of my mind. — Maya Angelou

For climate justice activist Mary Robinson, Maya Angelou’s quote embodies the determination with which this generation must fight the effects of climate change, which are felt most by the poorest countries and communities.

Robinson, president of the Mary Robinson Foundation – Climate Justice and the United Nations secretary-general’s special envoy on climate change, visited Wake Forest as part of the University’s Voices of our Time guest speaker series. The event was part of a symposium on the “Human Face of Environmental Inequality,” which took place March 26-27.

Mary Robinson in the news

Robinson stressed that climate justice and human rights are directly connected, and that the world must act in solidarity — no country alone can protect its citizens from the effects of climate change.

The global population is expected to increase from 6.9 billion in 2010 to more than 9 billion in 2050. World leaders have voluntarily committed to limit warming by the end of the century to 2 degrees Celsius (3.6 degrees Fahrenheit) above the pre-industrial level. Beyond this, science suggests severe drought, rising seas and dangerous storms, as well as food and water insecurity are inevitable.

“Climate change is what gets me out of bed every morning with a sense of urgency,” Robinson said.

In our quest for clean energy and a carbon neutral planet, Robinson said time is running out. “We can’t wait on politicians and policy to change. We must all be thought leaders in our homes, communities and colleges. The world needs all of us. We all must be voices of our time.”

Junior Austin Cook, a politics and international affairs major, interviewed Mary Robinson for the University’s student newspaper, Old Gold & Black. “Mrs. Robinson’s work for human rights and climate justice is unmatched. Hearing her passion for these important challenges makes me think about the role my generation has to play. We don’t have the luxury of waiting around. These problems are real, and she made a compelling case that we all have to be more active and more vocal.”

Climate justice in the sciences

Andrew Wilcox, a graduate student in the master of arts in sustainability program, said Robinson did a great job balancing “emotional appeals with practical examples of what we can do as citizens to make an impact – to be thought leaders in our personal lives and civically engaged.”

Wilcox said he was also struck by how forceful Robinson’s call to action was and how effectively she channeled the moral imperative. “Her words gained urgency for me when she noted that for many people, particularly the vulnerable, the tipping point is here.

Wilcox was also excited to hear the symposium’s closing speaker Andrew C. Revkin, a science and environmental writer behind the Dot Earth environmental blog for the New York Times’ opinion pages, whom he was also lucky enough to get one-on-one time with when he chauffeured him from the airport.

“He’s really furthered this idea for me about humanity and how we’re changing the planet,” Wilcox said. “The only way we can get unity and cooperation is by first admitting that we have this inequality we need to account for. It’s only through this conversation that we’ll all be able to take united global action and a symposium like this is encouraging because it’s part of the conversation.”

Climate justice in the humanities

Junior English and anthropology major Sarah Millsaps developed a sense of connection and stewardship with the land as a young child, and she has tailored her studies to include classes focused on environmental issues like Radical Ecology and Human Rights of South America.

Millsaps agrees with Robinson that humanity has a moral problem, not an environmental problem. “We have extracted ourselves from and put ourselves above the environment, rather than working within the ecosystem harmoniously,” she said. “There are people whose livelihood depends on their use of land, but if we protect people, we can also protect the land.”

Millsaps spent two-and-a-half months working on an ecotourism sheep ranch in southern Argentina as a ranch hand. During her time there she learned that when a community depends on the land, choosing the environment over people is not an option. “It’s about protecting livelihoods through protecting the environment,” Millsaps said.

“Hearing Mrs. Robinson’s talk inspires me to find my own niche in which I can work towards the mutual well-being of humans and the environment,” said Millsaps. “Her efforts to magnify the voices of those marginalized by climate change encourages me to continue my passions to know a people and a place well enough that I am able to contribute to a future that takes care of human lives and the life that sustains them.”

About Voices of Our Time

The Voices of Our Time series is designed to bring major national and international speakers and topics to campus, so students and faculty have the opportunity to hear from thought leaders about key topics.

Robinson’s address was presented in conjunction with a two-day interdisciplinary symposium, “The Human Face of Environmental Inequality,” jointly sponsored by the Wake Forest University Humanities Institute, the University’s Center for Energy, Environment and Sustainability, and the Human Rights and Global Justice research group, an affiliate of the Humanities Institute.