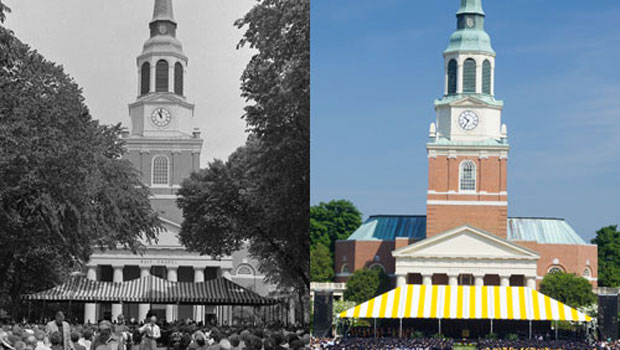 For more than 40 years, the raising of the Commencement stage and a tent cover on the Quad have been a treasured part of graduation preparation — signaling to faculty, staff, students and the community the transition of another group of Deacons from students to alumni.

Since 1966, Wake Forest has held Commencement on the Quad with the exception of four years when the ceremony was forced inside (1973, 1983, 1991, and 2010). In 1989, a rain and windstorm knocked down the tent the night before graduation, but the program proceeded on schedule without a tent.

Just like the previous four decades, the Wake Forest tradition of an outdoor graduation ceremony will continue, but this year the University has updated and refined the experience for graduates and their guests. 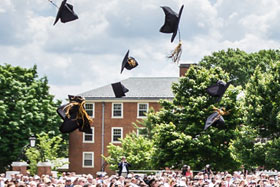 “For more than a year, Wake Forest has been looking at Commencement and seeking ways to improve the experience for graduates and families,” says Geni Greiner, executive director of University Events. “Our new Commencement experience has involved much preparation and planning, but it’s well worth it to celebrate our graduates both in 2015 and for many years ahead.”

Comedian and late night television host Stephen Colbert will deliver Wake Forest University’s Commencement address on Monday, May 18. He is most widely known as the host and executive producer of Comedy Central’s acclaimed series, “The Colbert Report.” Colbert is succeeding David Letterman as host of the “Late Show” franchise on CBS.

Also joining Wake Forest for the Commencement weekend will be baccalaureate speaker Jonathan L. Walton, the Plummer Professor of Christian Morals at Harvard University and Pusey Minister in Harvard’s Memorial Church. He is also a professor of religion and society on the faculty of divinity. Baccalaureate will take place Sunday, May 17 at 11 a.m. in Wait Chapel.

Commencement is a private, ticketed event. Visit the 2015 Commencement website for more information.