Colbert: ‘Give yourself extra credit’ 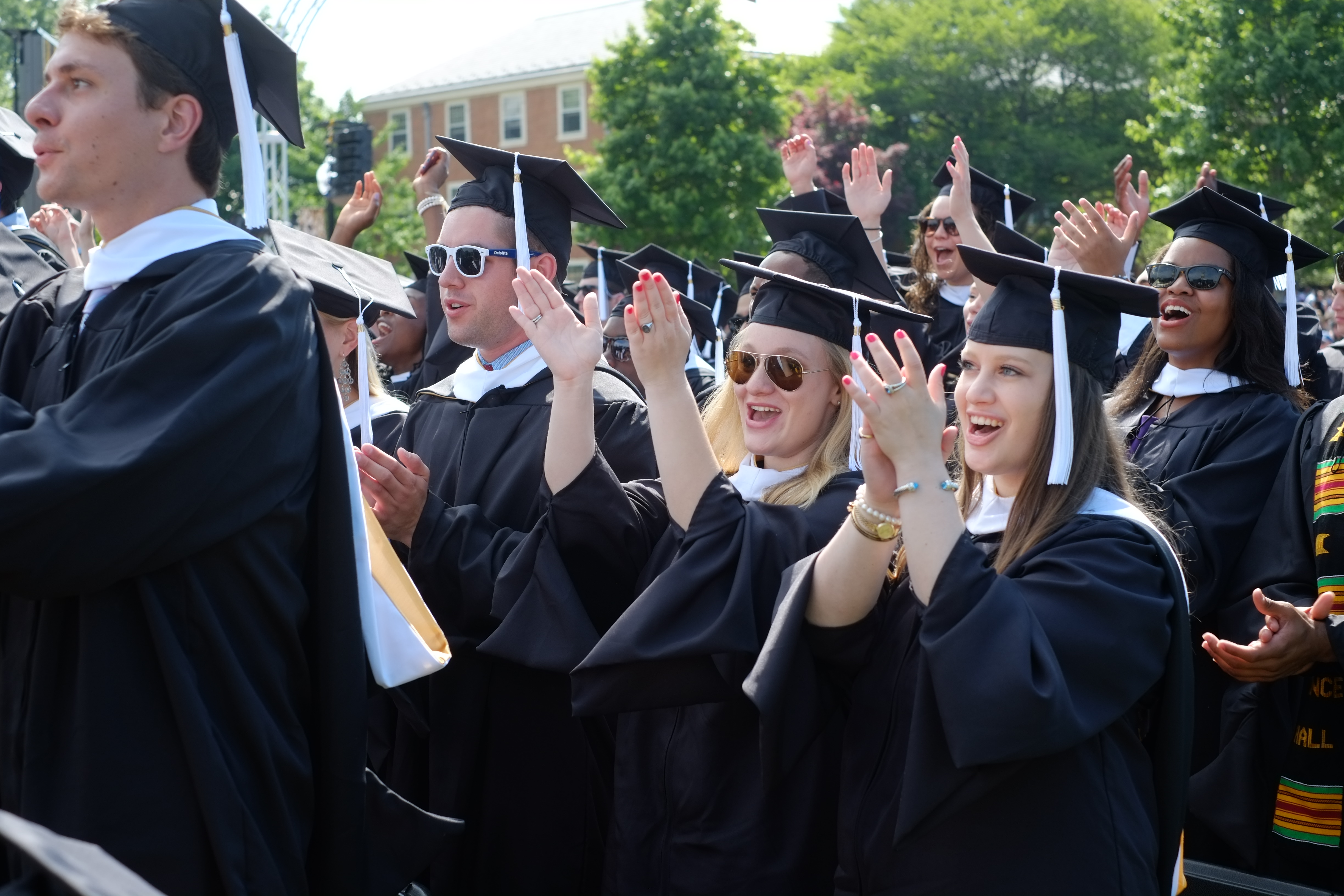 For senior Margaret Mulkerrin, Stephen Colbert offered the perfect advice for the Class of 2015.

“Do yourself a favor: Be an easy grader. Score yourself on a curve. Give yourself extra credit,” the comedian and late night television host said, while encouraging graduates to set their own standards for success as they transition out of the classroom.

Surrounded by family and friends, 1,861 graduates faced their futures against the backdrop of a new, modern, open-air stage designed to complement the structure of Wake Forest’s iconic Wait Chapel.

Hearn Plaza was bustling on May 18 with a crowd of more than 12,000 gathered to celebrate the achievements of 1,044 undergraduates and 817 graduate and professional students who received degrees. 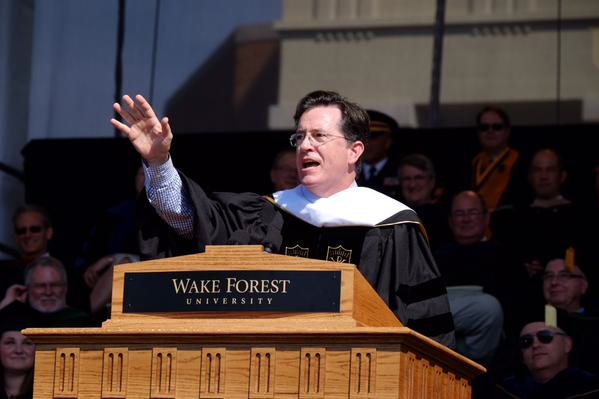 To watch the livestream, including Colbert’s commencement address, click here.

In his opening remarks, President Nathan O. Hatch, called commencement “a day of joy and celebration.” And it was, in a picture-perfect way, evident by the smiling faces and the cheers as family connected with their grads during the processional, taking photos, waving, and pumping fists in the air. Prior to the ceremony, the jumbotron screens flickered non-stop with Tweets and Instagrams from grads and their guests, eliciting fun responses.

As Student Government president, Mulkerrin, a political science and art history double major, from Rye, N.Y., was one of three students who served on the commencement speaker selection committee, and she was hoping for a political humorist. Colbert was her first choice.

“Political humor has the power to make people think about things in a different way,” said Mulkerrin. “The political humorist allows us to talk about really difficult things and look at something we haven’t seen or thought of before.”

Colbert, who will succeed David Letterman as host of the “Late Show” franchise on CBS, lived up to his reputation of commencement speech greatness when he delivered about 15 minutes of wry commentary spotlighting Wake Forest and many of its traditions, including streaking and rolling the Quad.

He immediately had the crowd laughing on an already 80-degree morning with a reference to the “scarf” he’d been given on a “chilly day” for the honorary degree, Doctor of Humane Letters. “I’m a huge fan of humans,” he quipped.

Among the jokes, Colbert also delivered a few nuggets of wisdom.

“I hope you find the courage to decide for yourself to find what is right and what is wrong. And then, please expect as much of the world around you. Try to make the world good according to your standards. It won’t be easy,” he said.

“Your job, Pro Humanitate, is to prove us wrong,” he said, with appreciation for Wake Forest’s motto. “Because if you don’t prove us wrong, then forget everything I’ve been saying.”

His speech was a hit with parents and graduates alike. They said it was incredible, hilarious and personal, yet with a real message.

Daniel Conde, computer science major, from New York, N.Y., said after the ceremony that the impact of graduating had not fully sunk in and it had been a bittersweet day.

“It is an emotional time, but also very happy. Stephen Colbert was fantastic and I really liked his message.”

Chris Gretchen, a Business and Enterprise Management major, who will begin his career at Oracle, agreed. “I want to thank all of my professors and my family who have been with me from the start. Colbert was the cherry on top for this remarkable day.”