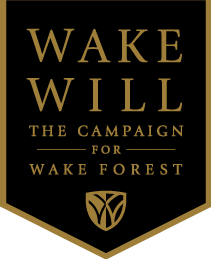 Two years earlier than projected, Wake Will: The Campaign for Wake Forest has reached the half-billion dollar mark in total campaign commitments and is more than 83 percent toward its Reynolda Campus goal.

As of June 30, 2015, Wake Forest has raised more than $503 million of its $600 million goal for the Reynolda Campus. The University received over $100 million in gifts and commitments between July 1, 2014 and June 30, 2015, signaling the institution’s largest-ever fundraising year.

“When we launched Wake Will: The Campaign for Wake Forest, we did so with great ambition and transformational dreams,” said Wake Forest President Nathan O. Hatch. “Our alumni, parents and friends embraced our vision for Wake Forest’s future and helped secure our traditions while inspiring innovation. Today, we celebrate reaching the half-billion dollar milestone – a truly significant moment for the University – and the impact it has on our campus.”

Wake Forest publicly launched its campaign in October 2013 and, in conjunction with the Wake Forest Baptist Medical School’s campaign, intends to invest $1 billion in student, faculty and facility support. Wake Will already has made possible a number of wide-ranging benefits to the Reynolda Campus, including:

“Never before have we witnessed this kind of momentum. But we aren’t done yet,” said Hatch. “Wake Will carries the weight of tradition and the promise of a better tomorrow. And so we will continue the work together.”

“We can celebrate because thousands have seen the importance of our need and responded in kind. A full two years ahead of schedule, Wake Will has reached the half-billion dollar milestone,” said Donald E. “Don” Flow (MBA ’83), chair of the Wake Will Campaign Cabinet. “This generosity is simply overwhelming and the spirit of Pro Humanitate is inspiring. I am honored to be part of a community that is committed to making a difference in the world, starting with the lives of the young people educated at Wake Forest.”

Harsh Patolia, a senior biophysics major, is one of the young people who has benefitted from the generosity of Wake Will donors.

“I would not be at Wake Forest University without the support of its financial aid opportunities,” said Patolia. “As a Gordon Scholar, Wake Forest has immersed me in the liberal arts through co-curricular and extracurricular experiences. From service abroad in Rwanda to researching on the campus for a summer to studying in Vienna for a semester, many of the incredible experiences I’ve had over the past three years were possible due to Wake Forest’s financial aid opportunities. The financial aid provided by Wake has facilitated my intellectual and personal development as both scholar and citizen.”

Additional information about the campaign is available at wakewill.wfu.edu.