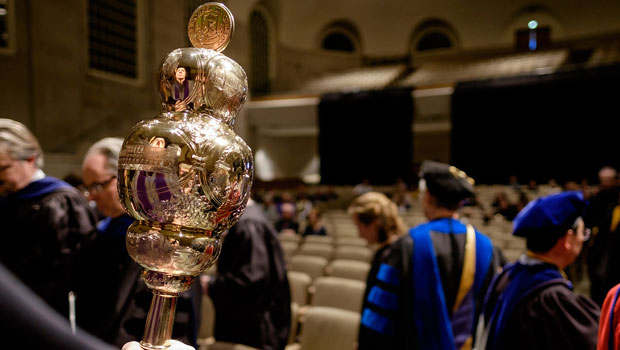 The Wake Forest community commemorated 182 years since the University’s founding at Founders’ Day Convocation in Wait Chapel on Feb. 18.

The celebration recognizes student leaders and honors faculty for teaching, research and service.

Each year, three students are selected to deliver an oration on Founders’ Day that addresses how they have changed during their four years at Wake Forest.

The winners of the 2016 Senior Orations Competition are:

The University’s highest honor, the Medallion of Merit, is presented to someone who has rendered distinguished service to the University, including past presidents, trustees, benefactors, alumni, and retired faculty and administrators. This year it was awarded to two members of the Wake Forest community, Jenny Robinson Puckett (‘71 P ‘00) and James T. “Jim” Williams (’62, JD ’66, P ’89, P ’92, P ‘96), for their outstanding achievements. 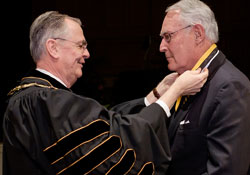 Ever since Jim Williams enrolled at Wake Forest as a first-generation college student on a football scholarship nearly 60 years ago, he has seen the University from every possible angle: as a student, parent, alumnus, die-hard fan and trustee. A widely regarded top corporate trial attorney, Williams has held notable leadership roles professionally and civically, while always remembering his alma mater. At Wake Forest, he has served as a member of the Alumni Council, College Board of Visitors and Law Board of Visitors. He also has served on the boards of Wake Forest Baptist Medical Center, Wake Forest Health Sciences Board and the Wake Will Campaign Cabinet. While he was on the Board of Trustees, he served as chair and vice chair before being named a life trustee. In 2014, he received Wake Forest’s Distinguished Alumni Award. 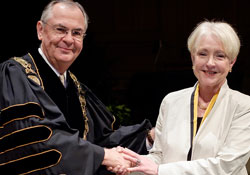 At Wake Forest, Jenny Puckett has been a beloved Spanish instructor in the classroom and an enthusiastic contributor to student life. But Puckett’s love for Wake Forest is never more fully on display than when she tells us the stories of our shared past. One of her greatest research interests is the history of Wake Forest, telling the untold story of the University’s 10th president, Harold Tribble, who was charged with relocating the campus to Winston-Salem. Her historian status has grown legendary as she travels from coast to coast, telling alumni, parents and friends at Wake Will campaign events about the people, places and circumstances that have made the community of Wake Forest what it is today. Though she retired from teaching in 2013, her contributions in the classroom and across the country on behalf of Wake Forest have set her apart.

Past Medallion of Merit award winners. 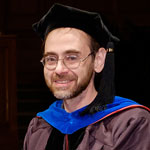 Mathematics professor Ken Berenhaut received the Faculty Award for Excellence in Mentored Scholarship in the Sciences. Berenhaut’s efforts to advance the knowledge and experiences of undergraduate students include advising 30 of them, co-authoring more than 20 publications with them, and promoting their research as founding editor of Involve: A Journal of Mathematics. Berenhaut is known for investing the time and carefully selecting problems that undergraduate students can be equal participants on, so that their work together can be a genuine collaboration. As one faculty member noted: “He doesn’t lower his standards; he finds a way to elevate undergraduates to the highest standards.” 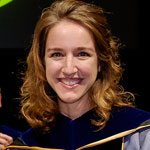 In only her fifth year at Wake Forest, Assistant Professor of English Laura Aull received the Faculty Award for Excellence in Mentored Scholarship in the Arts and Humanities. Aull has worked closely with undergraduate students who have presented their research on the writing abilities of incoming students to our own faculty as well as at state, national and international conferences. A recent graduate reflected upon Aull’s profound effect on the paths her students follow: “These two summers of research under Dr. Aull’s tutelage completely altered my course of study and where I am currently as an alumnus…It was not the content of the study that changed my academic life, but the context of Dr. Aull’s mentorship.”

Award for Excellence in Research 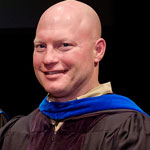 This award is presented annually to a member of the faculty who is an outstanding scholar at an early stage of his or her career. This year’s winner was Jeffrey Katula, an associate professor of Health & Exercise Science. Katula’s research involving the study of human behavior as it relates to the prevention and management of chronic diseases and disability has been widely published and recognized internationally. The Society of Behavioral Medicine Public Policy Leadership Group published an editorial highlighting the importance of Katula’s work and the director of the National Institute of Diabetes and Digestive and Kidney Diseases (NIDDK) referred to his research as the “gold standard” for diabetes prevention translation. 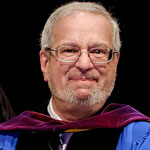 Donald O. Schoonmaker Faculty Award for Community Service
Professor of Music David Levy joined the Wake Forest faculty in 1976 and his commitment to service – from department chair to Associate Dean of the College for Faculty Governance – is woven into the fabric of the institution. His exceptional service as a teacher-scholar includes serving as founder, coordinator, and instructor for the “U” Series – sponsored by the Winston Salem Symphony and the Reynolda House Museum of American Art – and on the Board of Directors of the Winston Salem Symphony, among various other leadership positions.

Jon Reinhardt Award for Distinguished Teaching
Associate Professor of Romance Languages Linda Howe received the Jon Reinhardt Award for Distinguished Teaching, which recognizes an experienced faculty member who exemplifies the ideals of a liberal arts education. Howe has fueled students’ passion for literature and commitment to cultural exchange and academic excellence, taught them to question and think critically, and opened the paths that have led them to fulfilling international careers. Students say she taught them the beauty and meaning of narrative fiction in a foreign language, as well as how to use literature to promote intercultural understanding. 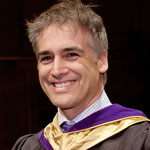 Joseph Branch Excellence in Teaching Award
Professor of Law and Associate Dean W. Jonathan Cardi received the Joseph Branch Excellence in Teaching Award, which is presented to a member of the School of Law who exemplifies teaching and service to the legal profession. While known among students for his exceptional torts course, Cardi’s devotion extends beyond his classes. Recently he helped develop a legal skills assessment and portfolio that provides career guidance to students and alumni. 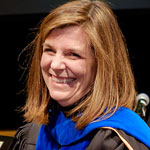 Kulynych Family Omicron Delta Kappa Award
Each year this award recognizes an outstanding faculty member who bridges the gap between classroom and student life. Michele Gillespie, Dean of Wake Forest College and Presidential Endowed Professor of Southern History. Gillespie became the first Wake Forest faculty member to be honored with an endowed Presidential Chair, which recognizes and supports faculty who excel in both academic leadership and outstanding scholarship. Students cherish Professor Gillespie’s mentorship and guidance. One ODK member said: “As a professor, she pushes students to truly do their best work and to become responsible historians, even as undergraduates. Additionally, Professor Gillespie gets to know the person behind the papers, putting time and effort into understanding a student’s interests, passions and hopes for the future.” 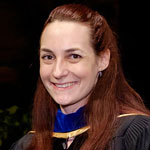 Reid-Doyle Prize for Excellence in Teaching
Assistant Professor of German Tina Boyer received the Reid-Doyle Prize for Excellence in Teaching, which is awarded to outstanding faculty members in the early part of their careers. Boyer employs the latest technology to enhance and expand her pedagogy in ways students readily embrace. Her department chair said, “They enable her to greatly expand the students’ exposure to the material in meaningful, creative, and enjoyable ways that enhances the language learning experience far beyond what is typically done.”