Froggie went a courtin’ and waved goodbye to rival wooers 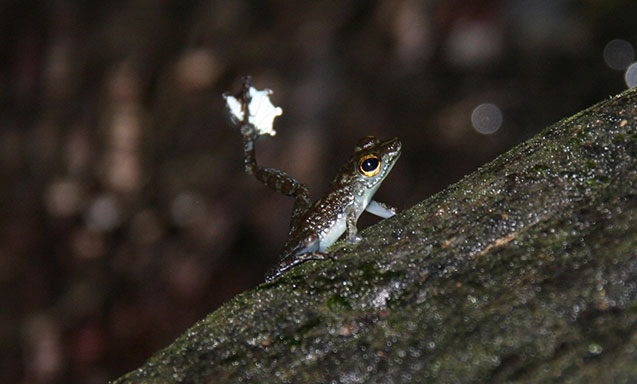 Most frogs use acoustic signals – or croaks – to communicate during mating season, but some species have also developed a wave, called a foot flag, as a signal to deter the competition.

They fully extend their back leg over their head, rotating it backwards in an arc to expose white-colored foot webbing, and then retract it to the body. New research from Wake Forest University studies the role testosterone plays in the evolutionary process of these waving displays.

Published by PNAS, the study focused on the Bornean rock frog species that lives near fast-flowing streams in the jungles of Borneo. The research was conducted on frogs living in an enormous indoor enclosure that replicates the Bornean rain forest at the Vienna Zoo in Austria.

“We tested whether the evolution of these waving displays in males is marked by a change in how hormones, like testosterone, influence the muscles that control limb movement,” said Fuxjager, a Wake Forest biologist who studies physiological and behavioral mechanisms of animals, especially those influenced by hormones.

“We know that testosterone is an important regulator of many types of sexual behaviors, so it seems a natural hypothesis that this steroid might also influence waving by affecting the motor systems that control physical movement,” he said.

Male Bornean rock frogs compete with each other for access to breeding sites by producing so-called foot flags as a close-range signal. This behavior is thought to have evolved because the environment in which they live – near waterfalls – is too loud for them to get their message across using only vocal croaks.

“We found that the evolution of this new display type is marked by a change in the way that hormones act on the muscles that control the waving movements,” Fuxjager said. “Moreover, we find that this change is similar to the one that happened to the voice box in frogs when they evolved the ability to croak.”

The data confirmed that the rock frogs’ leg muscles are about 10 times more sensitive to testosterone than the leg muscles of a closely related frog that doesn’t produce a foot flag, he said. Moreover, they were able to show that testosterone increases foot-flagging behavior in rock frogs, confirming that the hormone does in fact “turn up” waving behavior.

“These data therefore suggest that the evolution of the foot flag is associated with a dramatic change in how hormones act on specific muscles in the body, particularly those muscles that control the display in the first place,” Fuxjager said. “These findings provide novel insight into how the evolutionary gain of a sexual display trait may be augmented by evolution of the hormone systems that control and refine adaptive motor skills.”