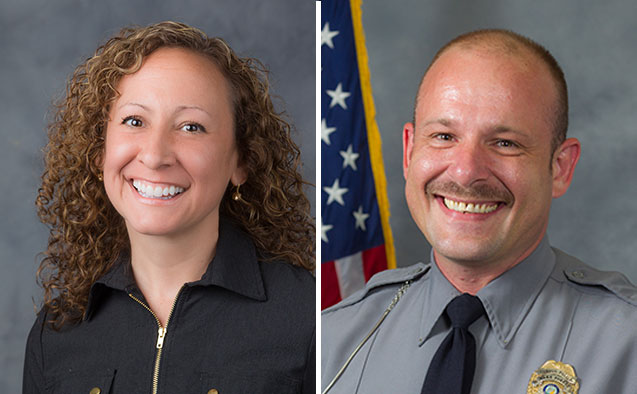 Wake Forest names ‘Employees of the Year’
Sergeant James Gravely with the University Police and Sarah Wojcik-Gross, assistant director of client services in Information Systems, were named Wake Forest University’s 2017 “Employees of the Year” during the annual Staff Rewards & Recognition Luncheon Oct. 24. The winners were nominated by faculty and staff for their contributions in the areas of innovation, integrity, accountability, inclusion and Pro Humanitate. Gravely was honored for his leadership in the police department and Wojcik-Gross was honored for her commitment to Information Systems and the Staff Advisory Council, in which she serves as president.

Thonhauser named 2017 American Physical Society Fellow
Timo Thonhauser, associate professor of physics, has been elected by the American Physical Society as one of its 2017 APS Fellows. The APS Fellowship Program recognizes members who have made exceptional contributions to the physics enterprise, including outstanding physics research, important applications of physics, leadership in service to physics, or significant contributions to physics education. The APS recognized Thonhauser for his contributions to include van der Waals interactions in density functional theory. His most recent research includes a new method for capturing radioactive waste from nuclear power plants. According to a new study published in Nature Communications, this technique is cheaper and more effective than current methods, and may be a potential boon for the energy industry. Read more at news.wfu.edu.