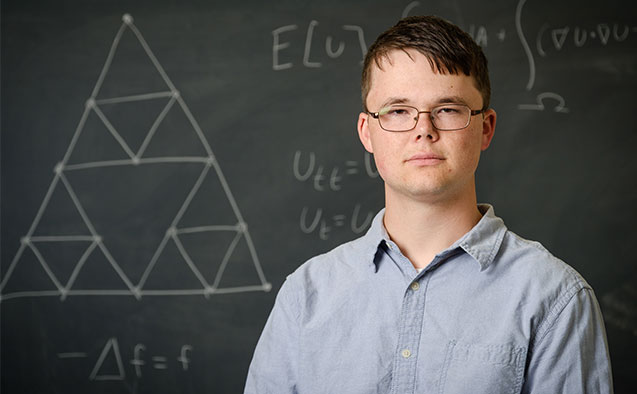 Dylan King, a sophomore mathematics and computer science major from Walnut Cove, N.C., has been named a 2018 Barry S. Goldwater Scholar. King was selected as one of 211 students from around the country to receive the award for the 2018-19 academic year.

King was selected for the Goldwater Scholarship based on academic merit from a field of 1280 natural sciences, mathematics and engineering students from 455 institutions.

The scholarship will cover the cost of tuition, fees, books, and room and board up to a maximum of $7,500 per year.

“I have a burning passion for mathematics,” said King, who is a Reynolds Scholar at Wake Forest and plans to pursue a Ph.D. in mathematics. “Winning the Goldwater will support me financially as I continue to learn, while asking (and hopefully answering) tough research questions.”

His research is focused in the area of applied math. At Wake Forest, King has studied energy-minimizing surfaces with assistant professor of mathematics John Gemmer.

“Many surfaces in nature are optimized for some task, like absorbing nutrients in the intestines or preventing water loss in plants. I have worked on providing mathematical explanations, through analysis and numerical experiments, of why some of these surfaces are shaped the way they are,” King said.

“Dylan is an exceptionally talented and ambitious student with substantial potential as a scientist,” Gemmer said. “He is developing and analyzing a dynamic model of growing thin elastic sheets that can be used to understand the generation of fractal like patterns observed in systems ranging from wrinkled lettuce, to torn plastic, to potato chips, to swelling soft tissue. This project has required Dylan to synthesize advanced techniques from calculus of variations, partial differential equations, the theory of elasticity, and numerical analysis. I am exceptionally pleased that Dylan’s hard work on this project has been recognized for this award.

During the summer of 2017, King studied at Cornell University with professor of mathematics Robert Strichartz. He will study mathematics in Budapest, Hungary, during the 2018-19 academic year.