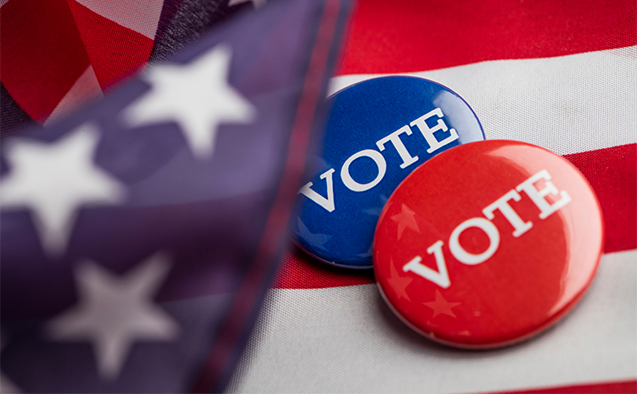 From state constitutional amendments to immigration, Wake Forest faculty experts can comment on a variety of 2018 midterm election-related topics.

Author of the book, “State Constitutional Politics: Governing by Amendment in the American States,” Dinan is available to comment on amendments appearing on the 2018 ballot in North Carolina and in 28 other states. From voter ID to judicial vacancies, he can place particular amendments in nationwide and historical perspective. Based on his research, he can also address the arguments and issues that routinely surface in campaigns supporting and opposing various amendments. Dinan closely follows North Carolina political races and teaches courses on campaigns and elections, state politics and Congress and policymaking.

Llewellyn focuses on political speeches and rhetoric. He is a scholar of rhetoric whose work includes analyzing persuasive language from the nation’s most prominent politicians, coaches and civil rights leaders. A former speechwriter and public information officer, Llewellyn also specializes in crisis communication, having studied the intersection of politics and public relations for nearly 30 years. He can also comment on political scandals and public apologies.

Wilkinson can offer insights and commentary on Latino voters for the midterm elections. She is an expert on Latino political behavior in the U.S., studies Latinos in U.S. politics, national and local immigration policy, and racial attitudes among Latinos and other ethnic groups. She can discuss the demographics and election-related priorities of Latinos. Wilkinson authored a chapter “North Carolina Latinos: And Emerging Influential Electorate in the South” in the book “The Pivotal Role of the Latino Electorate in the 2012 Election.” She is also the author of “Partners or Rivals? Power and Latino, Black and White Relations in the 21st Century.”

A leading national expert on the federal special prosecutor, Harriger can address the influence the Mueller investigation may have on the 2018 elections. She is the author of The Special Prosecutor in American Politics and is regularly interviewed by national media outlets on the use of federal special prosecutors in American government. Harriger also studies political participation and voting among young people (including college students) and is the co-author of “Speaking of Politics: Preparing College Students for Democratic Citizenship through Deliberative Dialogue.” She can provide expert commentary on the latest Supreme Court developments and how they will likely impact midterm elections. She co-authored the book “American Constitutional Law” published in 2017.

Pisapia studies American political development with a focus on women, gender and politics and can comment on tensions between liberal and conservative social groups and the unprecedented number of women who are engaged in political movements, and who are seeking elective office this year. He can also address partisan polarization around education policy, religious freedom and, sex and gender equality in constitutional law, including the significance of the Kavanaugh hearings in the context of the #metoo Movement. Pisapia is working on a book titled, “Educating a Nation: Women’s Empowerment and the Shape of American Federalism. He won the 2013 Carrie Chapman Catt Prize for scholarship on women and politics. He teaches courses on American politics and political thought.

Brown studies the effects of immigration and racial divisions on policy outcomes and the micro-level effects of state actions on the lives of racial minorities and immigrants. Her research also focuses on the political origins and political consequences of social inequalities. She teaches courses on political sociology, social inequality, and race and ethnicity in politics.