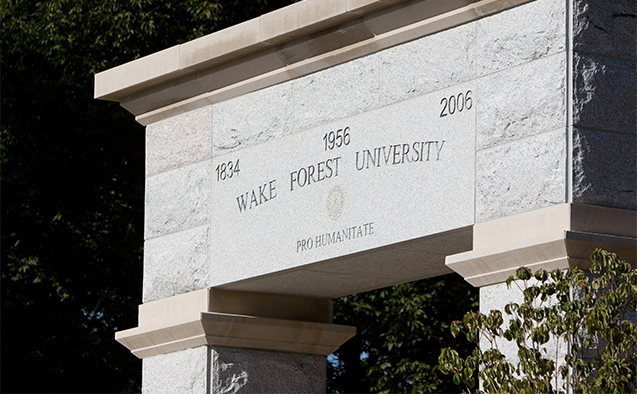 Out of that work came the Slavery, Race and Memory Project, for which a website was unveiled this summer.

“There are many universities that have, over the past couple of decades, begun grappling with their relationship and connections to slavery,” said Kami Chavis, associate provost for academic initiatives and co-chair of the Steering Committee for the Project. “It’s important to understand those relationships because they can and do have implications for today.

“Slavery is an ugly part of our nation’s past and racial discrimination persists today, but many institutions have been reluctant to explore these topics,” Chavis continued. “It’s important to discuss it because unless we reckon with the role that enslaved people had in building the physical structures, as well as the role they played in other aspects of Wake Forest, then we are not honoring an accurate depiction of our history.”

Other North Carolina institutions that are studying the role slavery played on their campuses include Guilford College, Elon University, Davidson College and UNC-Chapel Hill. At Wake Forest, a Steering Committee comprised of a diverse group of faculty, staff and students is engaging in work to fulfill the Project’s vision statement to “guide the research, preservation and communication of an accurate depiction of the institution of slavery in the United States” and “to also examine the University’s relationship to slavery and its implications across Wake Forest’s history.”

The Steering Committee has identified several core elements to this multi-year project, including:

In September, the Slavery, Race and Memory Project held its inaugural lecture with Corey D.B. Walker, a visiting professor of leadership studies and the humanities at the University of Richmond and a former dean at Winston-Salem State University. Walker presented “My Skin as a Legacy: Towards an Ethics of Slavery, Race and Memory” to a capacity crowd in the Porter Byrum Welcome Center’s Kulynych Auditorium.

“It’s important for not just the people on the Steering Committee but also the larger student body and faculty and staff to know about the history of Wake Forest,” said Jallow, the Student Government Association co-chair for Diversity and Inclusion and the committee’s student representative. “It’s important for all students to know the history of the universities they’re attending and about the statues and buildings on their campuses and who they honor.”

Woody isn’t on the committee but reached out to Chavis after hearing about it.

“A lot of people at Wake aren’t really engaged in our history,” said Woody. “I don’t think it’s a willing ignorance but instead a result of identity and place. Historically on Wake’s campus, these educational initiatives have not been engaging to the campus as a whole. It’s absolutely a great initiative because for far too long Wake Forest hasn’t acknowledged that part of our history.”

Woody has been approved for grant funding to facilitate a student trip to the International Civil Rights Center & Museum in Greensboro. A professor has been granted funds to take his students to the University’s original campus in Wake Forest, N.C. Other faculty members have plans to bring additional speakers to campus.

This summer, Wake Forest University President Nathan O. Hatch announced the establishment of the President’s Commission on Race, Equity and Community as part of larger institutional effort. His letter referenced the ongoing efforts of what is now called the Slavery, Race and Memory Project.

“When I came to Wake Forest, the library was working on creating an online course on the history of the University, and it was during that work that we realized there are gaps in our history,” said Tim Pyatt, dean of the Z. Smith Reynolds Library and Steering Committee co-chair. “We were founded on a former plantation in the eastern part of North Carolina in the 1830s during the peak of the slave economy.

“As we started looking into the role of enslaved people on campus, we decided to join the Universities Studying Slavery Consortium and establish a committee to explore next steps,” Pyatt continued. “We’re no longer on the original campus that was a plantation, but we wouldn’t be the institution we are now without the start we got in eastern North Carolina. We do feel like it’s very important to acknowledge our relationship with slavery.

Published in 1935, “History of Wake Forest College, Volume I, 1834-1865” offers early and incomplete glimpses into historical ties to slavery. Wake Forest has commissioned a Southern historian to do original academic research about the role of slavery and enslaved persons in its history. The Project will also explore past presidents, early board members and even students who had slaves.

The Steering Committee has looked closely at what other USS Consortium members are doing, including the College of William & Mary, as well as Brown, Harvard and Georgetown universities.

While Wake will consider other institutions’ successes, its efforts are unique in several ways. Key to the Committee’s efforts is sustainability and ensuring this isn’t a committee that meets for a year, issues a report and fades away.

“Professor Walker is an expert in the field and has worked with several other universities on similar projects, so we plan to utilize his expertise to help us think critically about how to engage in this work,” Chavis said. “It is critical for this Project to be imbued with the principles of truth, integrity, legitimacy and transparency, around which we’ve agreed to work. This Project covers the entire arc of racial issues in higher education. Although we begin with slavery and its relationship to Wake Forest’s founding, we will also explore the Jim Crow era in the U.S. and how Wake Forest shows up in that as well as in the modern day. It will allow us to think critically about the institutional culture at Wake Forest and about our current values.”