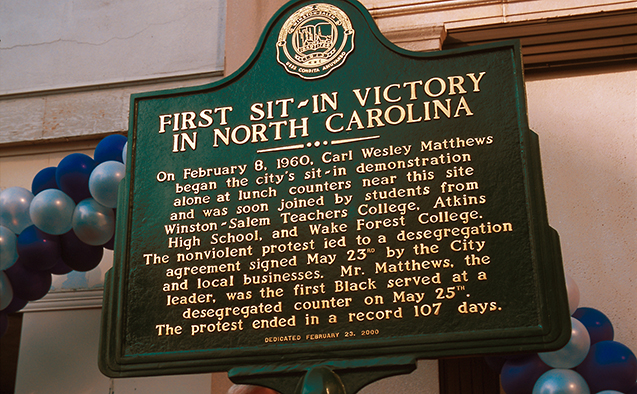 The historic sit-in led to a desegregation agreement among local merchants in the city later that spring.

A community commemoration vigil will be held Feb. 23 at 3 p.m. in downtown Winston-Salem to mark the 60th anniversary of the sit-in.  The event is free and open to the public.

The vigil will begin in front of the Millennium Center and process to the corner of Fourth and Liberty streets, where a historical marker designates the site as the location of the “First sit-in victory in North Carolina.” Winston-Salem State University Chancellor Elwood L. Robinson and  Wake Forest University President Nathan O. Hatch will open the event and lead a Vigil of Remembrance. Wake Forest School of Divinity Dean Jonathan L. Walton will give a keynote address. The WSSU Singing Rams, led by D’walla Simmons-Burke, will perform.

Twenty-one stools will be set up to recognize the students who took part in the sit-in more than half a century ago.  Robinson and Hatch will read the names.

Leading up to Feb. 23, events on both campuses will provide opportunities for learning and reflection as part of the week-long Legacies of Leadership series commemorating the 60th anniversary of the Winston-Salem sit-ins. A group of students from WSSU and WFU will travel together to the International Civil Rights Museum in Greensboro. Winston-Salem State will host the annual Heart & Soul Open Mic on WSSU’s campus, featuring Word of Mouth, a community poetry team, and students from WSSU, WFU and Winston-Salem Forsyth County Schools. The Open Mic event is open only to the WSSU campus community and participating schools.

The documentary “I’m Not my Brother’s Keeper: Leadership and Civil Rights in Winston-Salem,” produced by Wake Forest professors Mary Dalton and Susan Faust, will be shown in Wake Forest University’s Pugh Auditorium at 6:30 p.m. on Feb. 19. The public is welcome to attend.