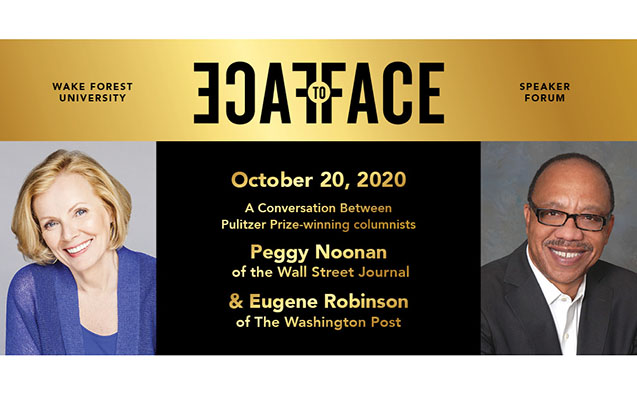 Wake Forest’s Face to Face Speaker Forum will host Peggy Noonan and Eugene Robinson for a virtual conversation on Tuesday, Oct. 20 from 7:30 to 8:30 p.m. Pre-programming will begin at 7 p.m.

The event is free for Face to Face Speaker Forum season subscribers and students, faculty and staff at Wake Forest, as well as students and faculty in the Winston-Salem area. Visit go.wfu.edu/facetoface to register for this event. Tickets for general audience are $10.

Peggy Noonan is a Pulitzer Prize-winning columnist for the Wall Street Journal, where her weekly column, Declarations, has run since 2000. She is also the bestselling author of nine books on American politics, history and culture, including the bestsellers “What I Saw at the Revolution” and “When Character Was King.” She is one of ten historians and writers who contributed essays on the American presidency for the book, “Character Above All.” In her most recent release, “The Time of Our Lives,” Peggy chronicles her career in journalism, the Reagan White House, and the political arena. On April 10, 2017, Noonan received the Pulitzer Prize for Political Commentary for her coverage of the 2016 Presidential Election.

Eugene Robinson uses his twice-weekly column in The Washington Post to pick American society apart and then put it back together again in unexpected and revelatory new ways. To do this job of demolition and reassembly, Robinson relies on a large and varied tool kit: energy, curiosity, elegant writing and the wide-ranging experience of a life that took him from childhood in the segregated South—on what they called the “colored” side of the tracks—to the heights of American journalism. His remarkable story-telling ability has won him wide acclaim, most notably as the winner of the 2009 Pulitzer Prize for his commentary on the 2008 presidential race that resulted in the election of America’s first African-American president.

Wake Forest University launched the Face to Face Speaker Forum in spring 2020. The community-facing series was created to bring world-renowned, influential voices to Winston-Salem to discuss topics in a variety of areas including politics, arts and culture, business and social justice.

The Face to Face Speaker Forum was set to launch in person in the fall of 2020. In-person programming originally scheduled for the fall has been rescheduled in consideration of the health and wellbeing of speakers and attendees due to the pandemic.

The revised 2021 Face to Face Speaker Forum season schedule can be found here.

Season subscriptions to all three in-person keynote events may be purchased online through the Face to Face Speaker Forum website. Single event ticket sales for in-person events will be available closer to each event, subject to availability.