What constitutes a life well lived? Wake Forest University professors are addressing this age-old question with the support of nearly $4.2 million in new research funding to study eudaimonia (yoo-dye-mo-NEE-uh)—Aristotle’s term for “flourishing.”

The mission of Wake Forest’s Eudaimonia Institute is to study the nature of human flourishing—as well as the institutions, attitudes and cultural practices that encourage it. An interdisciplinary intellectual community of scholars will explore the concept beyond the typical scope of how happiness is understood or used in everyday conversation.

In June, the Eudaimonia Institute began with a planning grant from the Wake Forest Office of the Provost. Now, the Charles Koch Foundation, a charitable organization supporting a wide range of scholarly opportunities and research at U.S. colleges and universities, has committed $3.69 million to support the institute over the next five years. Liz and Chris Wright, CEO of Liberty Resources and Liberty Oilfield Services, have committed an additional $500,000. Wake Forest anticipates additional contributions to the institute.

These grants will enable the Eudaimonia Institute to support:

“The pursuit of eudaimonia is one of the most important goals for humankind.” James Otteson, Executive Director of the Eudaimonia Institute, Professor of Economics and Thomas W. Smith Presidential Chair in Business Ethics

Otteson, a distinguished scholar of philosophy and political economy, is one of the world’s leading scholars on Adam Smith. He writes extensively on eighteenth-century liberalism, the history of economic thought, and moral philosophy. His book Actual Ethics won the 2007 Templeton Enterprise Award. 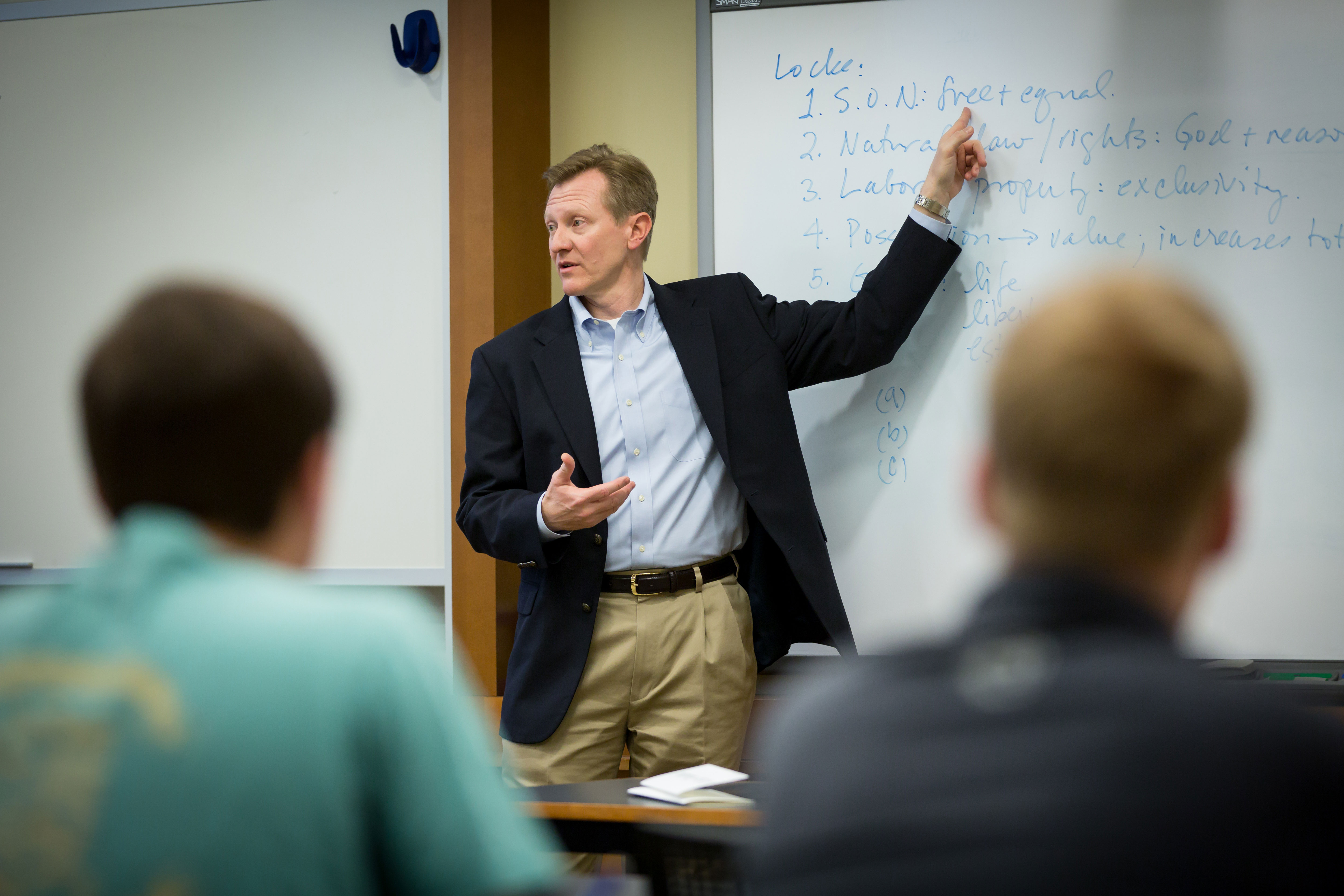 Otteson, a distinguished scholar of philosophy and political economy, in the classroom.

“There is no shortage of research institutes that look at happiness in various ways, but the niche we are serving brings together multiple disciplines and perspectives to create an intellectual community focused on the deeper notion of eudaimonia. We are grateful for the support that will enable a much more robust body of research than would be possible by looking only at political, economic, or societal influences and outcomes,” he said.

The Eudaimonia Institute expects to put forth its first call for research proposals later this year. Otteson said topics associated with the institute are likely to be more relatable than the ancient Greek name might suggest.

Take New York City’s proposed big-soda ban. There were significant bodies of political and social science research both for and against the ban as lawmakers, corporations and public health groups debated the controversial measure – which the state’s highest court ultimately struck down in 2014. The Eudaimonia Institute could support scholarly research that explores people’s reactions to the proposal and how it influenced – or not – their sense of well-being.

Another example is parenting. For many, becoming a parent has long been assumed to be a social, moral, or perhaps religious calling and also a key to a happy life. But does parenting actually contribute to eudaimonia? Recent research, including contributions by Wake Forest scholars, questions whether having children actually makes people happier. This kind of issue—which can be addressed from many angles, including psychological, economic, moral, and political—is what the institute’s multi-disciplinary community hopes to address.

“The Eudaimonia Institute’s commitment to the rigorous academic exploration of human flourishing from multiple disciplines and perspectives has been affirmed by its Faculty Advisory Board, a group of a dozen Wake Forest faculty from across the university,” said Provost Rogan Kersh. “Institute researchers will not shy away from asking or investigating difficult questions; the study of individual and collective well-being is too important to be viewed solely from any one perspective. I look forward to the diversity of thought and scholarship, and the hoped-for landmark findings, which emerge as a result of this generous support.”

Additional information about the Eudaimonia Institute is available at eudaimonia.wfu.edu.