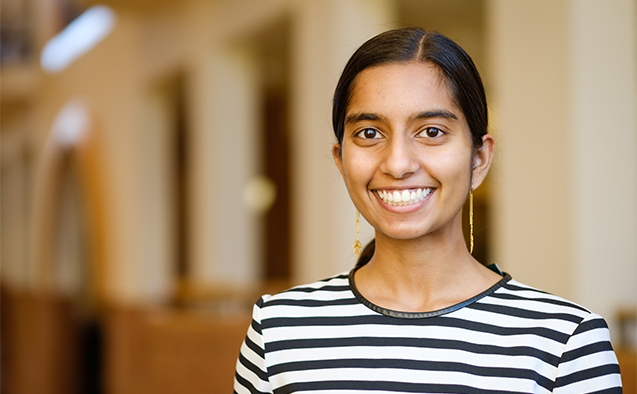 Wake Forest senior Savarni Sanka has been named a Rhodes Scholar. Sanka, who is from Raleigh, N.C., plans to pursue a masters of public policy and masters of science in refugee and forced migration studies.

Sanka was among 32 Americans chosen by the Rhodes Trust on Nov. 21 to study at England’s Oxford University in the fall of 2021.

She is the 14th Wake Forest student to be named a Rhodes Scholar since 1986.

“It’s an incredible honor to be named a Rhodes Scholar,” Sanka said. “I owe my success to every mentor and teacher I’ve had from kindergarten to now. Every single professor at Wake Forest has influenced me in some way.”

At Wake Forest, Sanka is majoring in politics and international affairs and Spanish. She has also studied or done volunteer work in Spain, Morocco, and Nicaragua. She has been a leader in the Student Association for the Advancement of Refugees.

“Having had the opportunity to work alongside Winston-Salem’s migrant community has been one of the most rewarding parts of my college career,” said Sanka. “I’ve been involved with migrant communities for a long time. My parents immigrated to the States from India in the 1990s and seeing the marginalization and silencing that migrant communities often face, I wanted to be a part of building more equitable and just societies where everyone has access to opportunity and where everyone’s voice can be heard.”

Sanka worked closely with the Wake Forest Scholars Program toward her goal to earn the Rhodes Scholarship. She said Tom Phillips, recently retired director of the program, inspired her to be true to herself.

“Savarni shared with me her developing research interests, her passion for service, and her love of languages and how they can be used to help understand people other than ourselves,” Phillips said. “She is one of the two best, pure altruists I worked with in my 40 years at Wake Forest. Her every step and every act is engendered by a passion for learning and a need to serve.”

In addition to her majors, Sanka is earning a minor in Middle East and South Asia Studies.

“I am grateful to Professor Darlene May, who taught me Arabic. Learning Arabic opened the doors for so many learning experiences for me,” Sanka said.

She is the recipient of the Joseph G. Gordon Scholarship, and is a member of Phi Beta Kappa, the nation’s oldest and most prestigious academic honor society for the liberal arts.