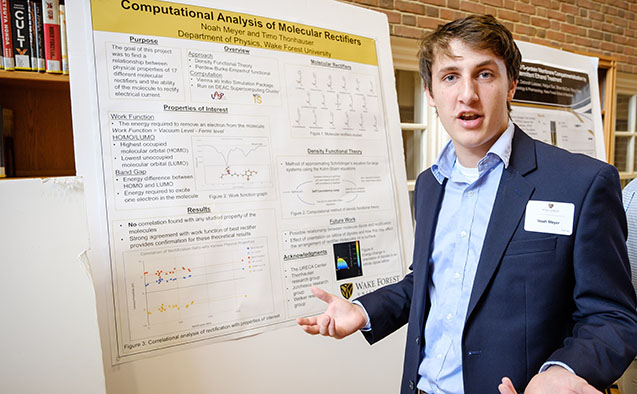 Wake Forest University senior Noah Meyer, who studies physics and applied mathematics, has been awarded a  Graduate Research Fellowship from the National Science Foundation. Meyer, who is from Dayton, Ohio, plans to pursue a PhD in physics in the field of condensed matter theory.

The creation of large quantum computers relies on discovering materials which can be used as the fundamental building blocks of the computers, called quantum bits (or qubits). Meyer’s proposed research includes performing quantum physical simulations of a large number of materials, searching for properties which suggest they might serve as effective and stable qubits.

“Specifically, I would be identifying materials which exhibit coherence (or entanglement) between the electrons in the material, and which maintain this coherence for a long time and for high temperatures,” said Meyer. “When large scale quantum computers are eventually built they will play a major role in nearly all areas of society and research, including cryptography, drug discovery, machine learning, and more.”

National Science Foundation graduate research grants support outstanding graduate students in STEM by providing three years of financial support (including an annual stipend of $34,000 and a cost of education allowance of $12,000 for tuition and fees) to those pursuing research-based master’s and doctoral degrees at accredited US institutions.

“Both in and out of the classroom, the faculty I have had the opportunity to interact with have consistently gone out of their way to help me and other students succeed.” Noah Meyer

“I owe so much of my success to the incredible advisors I have had at Wake Forest. Dr. Timo Thonhauser has been my research advisor since my first semester at Wake and has been an incredible mentor to me not only for my research but for my career as a whole.

Dr. Oana Jurchescu has similarly been a phenomenal source of encouragement and advice for me, and has gone out of her way to connect me with opportunities and resources throughout my time at Wake,” Meyer said.

“Finally, Dr. John Gemmer has not only been an excellent mentor for me in mathematics and science as a whole, but has helped to build and include me in a community of passionate students which has been one of the most meaningful parts of my time at Wake Forest.”

Meyer is a member of the Society of Physics Students and the Association for Women in Mathematics. He has also been active in the Winston-Salem Community through the Student Association for the Advancement of Refugees. “The highlight of my involvement at Wake has been my role in organizing the Integrating Research in Science conference, which is an opportunity for undergraduates to present research in STEM. I learned about organizing a conference and also met a lot of incredible students from throughout North Carolina.”

He describes the two-page research proposal as the most challenging aspect of the fellowship application. “In designing this proposal I learned about the process of identifying interesting questions, gathering the background information, and using previous research to formulate a way to answer the question. I highly recommend any students interested in STEM graduate school to apply even just for the chance to write a formal proposal.”

The on-campus preparation and nomination process for the NSF Graduate Research Fellowships and other external scholarships is coordinated through the Wake Forest University Scholars Office. Interested students are invited to visit the website to learn more and arrange an appointment.