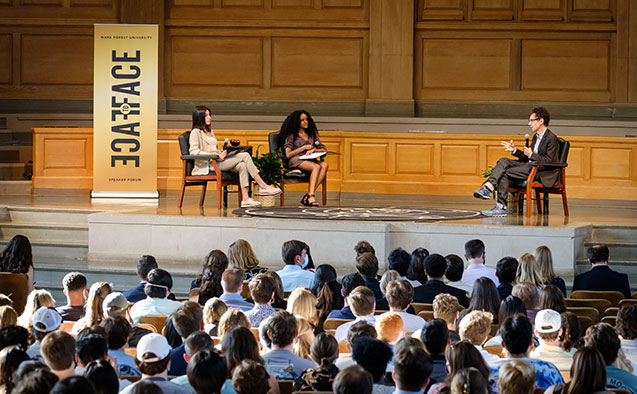 Hundreds of students from Wake Forest and other area colleges and high schools enjoyed an hour with journalist and author of “Blink” and “Outliers” Malcolm Gladwell yesterday in Wait Chapel.

The student event – a unique opportunity for questions and answers with Gladwell – was held prior to the first in-person Face to Face Speaker Forum since the launch of the signature speaker series in March 2020.

Students from the University’s Program for Leadership and Character helped lead the event with scholars from the program taking the stage to lead the moderated session.

Gladwell addressed questions that were top of mind for students from how he decided on his career to his views, as a Canadian, about race issues in America.

The group discussed “Outliers” and the 10,000-hour rule. “For some, putting together all the pieces takes time,” Gladwell said. “It takes a while to figure out complicated things. We should be more forgiving of the mistakes we make and the mistakes others make about us. One unfortunate statement is not proof of someone’s heart.”

Continuing on the theme of a divided country, Gladwell referenced politics and social media as two areas of concern and described “the lost art of forgiveness” as unhealthy for our culture.

— The Program for Leadership and Character (@character_wfu) September 14, 2021

“This was a once-in-a-lifetime opportunity to speak with an author whom I grew up reading in high school and discussing his ideas with peers, friends and family, said Wake Forest sophomore Rute Ayalew. “Having this chance not only to meet but to hold a meaningful conversation with Malcolm Gladwell is a manifestation of Wake Forest’s dedication to its students. I could not be more grateful to meet my moral exemplar through Wake Forest and the Leadership and Character Program.”

Rute Ayalew was joined onstage by fellow Leadership and Character scholar Sofia Ramirez Pedroza, who is also a Stamps scholar. Both moderated the conversation. “They asked provoking questions that led to an insightful discussion of culture, forgiveness and the value of engaging others across difference,” said Michael Lamb, assistant professor, interdisciplinary humanities and director of the Program for Leadership and Character. “Mr. Gladwell’s emphasis on character as an essential aim of universities provided further affirmation of what makes a Wake Forest education distinctive and transformative.”

After the Q&A, students were invited to attend Gladwell’s 7:30 p.m. talk at the Face to Face Speaker Forum event in the Joel Coliseum. A unique feature of the series is the hour-long student-facing opportunity where guests answer questions and engage in one-on-one conversations on stage.

If you had been there you might have noticed…
Shared by Betsy Chapman, WFU’s executive director of family communications