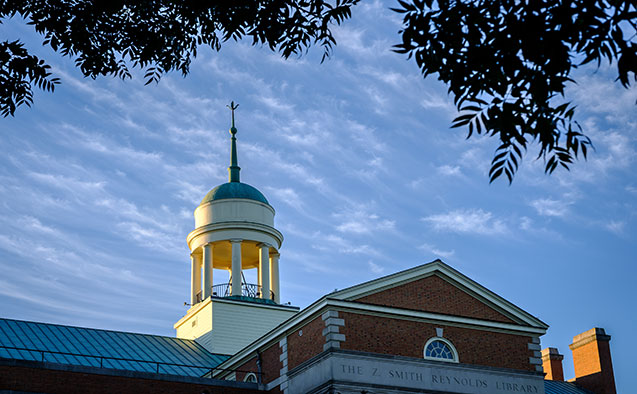 Center studying the African American experience hires assistant director
By Laurie Willis | news.wfu.edu
“My plan is to hit the ground running with planning and operations to begin executing the vision,” said Camaron Loritts. The Center for Research, Engagement and Collaboration in African American Life, or RECAAL, has several initiatives planned for next semester, including supporting education professor Danielle Parker Moore on a research project in partnership with Forsyth Family Power. – 11/01/2021

What it means for the jury to be nearly all white in trial for Ahmad Aubrey’s killing
By Ailsa Chang | NPR
Ailsa Chang talks with economics professor Francis Flanagan on the role of race in a jury. “So what we see in the data is that White men are actually more likely to convict Black defendants and less likely to convict White defendants, at least in North Carolina and some of the other southern states that we have looked at.” – 11/04/2021

Did someone say boobies? Meet these iconic Galapagos birds
By Ian Connellan, Gail MacCallum | Australian Geographic
Biology professor Dave Anderson has a soft spot for the Blue-footed booby. His study of the reproductive life history of Nazcas on Española Island has been running for three decades; he’s banded 17,000 individuals over that period. “It’s a very tractable system,” Anderson said of working in the Galápagos. “The birds have no fear of humans and they handle attention easily.” – 11/04/2021

God and guns
By Kimberly Winston | FiveThirtyEight
“Religion does matter to gun ownership, but not in any one simplistic way,” said sociology professor David Yamane. “The connection between gun ownership and religion is different depending on whether you are talking about religious behaving, belonging or believing.” – 11/04/2021

Women and the liberating power of no
By Anna Holmes | The Atlantic
Politics professor Melissa Harris-Perry is one of several women featured in this piece on what happens when women and girls say no. “We shouldn’t pretend that if only we could muster the courage to do it, there will be applause because most often there won’t be.… It is completely possible that if you say no you won’t get the chance to say yes. And that makes the calculation different for us than it does for boys.” – 11/05/2021

As fossil fuel use surges, will COP26 protect forests to slow climate change?
By Justin Catanoso | Mongabay
“As delegates from more than 190 nations gather in Glasgow, Scotland, for the opening of the United Nations climate summit known as COP26, they find themselves in a perilous situation largely of their own making,” writes Justin Catanoso. – 11/01/2021

Proponents of critical race theory should learn why some people fear it
By John Hinton | Winston-Salem Journal
“Love is the most powerful thing that breaks the back of fear, but love takes a number of different forms,” said Professor of the Practice of Public Philosophy at Harvard University Cornel West at a talk in Wait Chapel on Nov. 4. “On one hand, you have to try to get inside the skin of people and get a sense of why they believe what they believe.” The talk was hosted by the School of Divinity. – 11/04/2021

Redistricting plan puts Forsyth into Republican-leaning 12th Congressional district
By Wes Young, Wesley Young | Winston-Salem Journal
A redistricting plan for the coming decade puts all of Forsyth County into a Republican-leaning 12th Congressional district. “Other districts in other parts of the state, as in Charlotte, and around the Triangle area would be quite favorable for Democratic candidates,” said politics professor John Dinan. – 11/04/2021