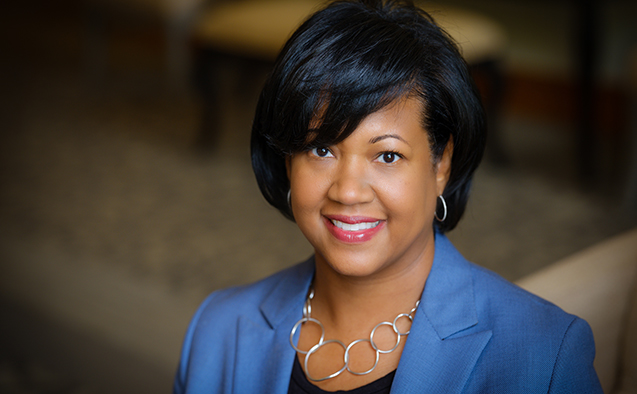 Vice Provost Kami Chavis, a nationally known criminal justice expert and a professor on the School of Law faculty, has been named the R. Hugh and Nolie Haynes Professor of Law at William & Mary in Williamsburg, Virginia.

Chavis, who has worked at Wake Forest for 15 years, will serve as the founder and director of the Center for Criminal Justice Policy and Reform. The Center will focus on issues including democratic policing, prosecutorial ethics, and law enforcement and technology.

She will remain at Wake Forest until July 1, when she begins working at William & Mary.

“I have enjoyed working at Wake Forest, unequivocally one of the best institutions in the nation,” Chavis said. “During my tenure at Wake, I have had the joy of teaching alongside distinguished colleagues in the law school,  developing initiatives for the criminal justice program and, as vice provost, working with other leaders across campus on important issues.

“Yet what will remain most dear to me about my career at Wake Forest are the wonderful friendships I have made,” Chavis continued. “While I am excited about what lies ahead at William & Mary, I will carry in my heart a deep affinity for Wake Forest University.”

Chavis began her academic career at the Wake Forest School of Law in 2006 and was promoted to full professor in 2012. She has taught courses related to criminal law, criminal procedure, policing and prosecutorial accountability and the law of policing. Her research focuses on a variety of criminal justice issues such as police and prosecutorial accountability, law enforcement and technology, federal hate crimes legislation and enforcement, racial profiling and bias in jury selection.

Her scholarship has appeared in many legal journals, including the Illinois Law Review, American Criminal Law Review and The Howard Law Journal, and shorter works have appeared in The New York Times, USA Today and other outlets. She is also a frequent contributor to national and international media outlets and has appeared on CNN, MSNBC, CTV and NPR.

Before being promoted to vice provost in 2020, Chavis was associate provost of academic initiatives and was responsible for managing many of the University’s academic and strategic initiatives. Her portfolio includes the Office of Civic & Community Engagement (OCCE), the Humanities Institute, the Center for the Advancement of Teaching and Learning, the Office of Online Education, the Professional Development Center, the Title IX Office, Wake Forest University Press and the Wake Forest Slavery, Race and Memory Project.

Before arriving at Wake Forest, Chavis was an assistant United States attorney in Washington, D.C., and prior to that she practiced law at two of Washington’s largest law firms. She received her bachelor’s degree from UNC-Chapel Hill and her J.D. from Harvard University.

Provost Rogan Kersh said he is saddened by Chavis’ departure but grateful for her leadership at Wake Forest, especially during her past four and a half years in the Provost’s office.

“Having Vice Provost Chavis literally next door has been indispensable to Wake Forest in so many ways–not least our ability to navigate the pandemic,” Kersh said. “Her collaborative partnership has enhanced everything from online education to community engagement to our interdisciplinary Deans’ Council academic initiatives. William & Mary is gaining not only a nationally-renowned criminal justice expert and dynamic teacher, but a beloved colleague who elevates all those around her.”

Added Law School Dean Jane Aiken: “Kami is an important public intellectual and a warm and supportive colleague, and we in the Law School are sad to see her go. William & Mary has landed a bright star in Kami Chavis, and we hope that there will be room for future collaborations with her.”