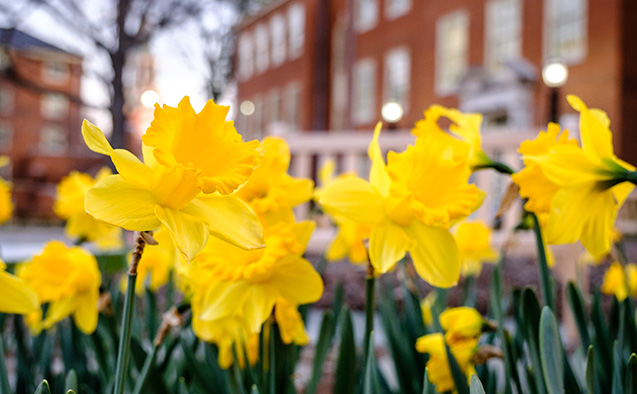 How the Ukraine Crisis led to … nickel hoarding
By Saahil Desai | The Atlantic
Americans have found a roundabout way to make some money: hoarding nickels. “Given the experience of the penny, I don’t see us getting rid of the nickel anytime soon,” said economics professor Robert Whaples, who has studied the effects of going penny-less. –3/18/2022

Talking to kids about nuclear tensions? Experts advise telling the truth
By Leanne Italie | PBS NewsHour
Fear of nuclear devastation can have a lifelong impact on children, said counseling professor Nathaniel N. Ivers. “Children know there is very little they can do to protect themselves if a nuclear bomb were to hit their area, which can create feelings of helplessness and hopelessness. It also can create a sense of nihilism, especially in older children and adolescents. – 3/16/2022

Why aren’t gas prices dropping if oil is getting cheaper?
By Janet Nguyen | Marketplace
Haresh Gurnani, a professor of operations and supply chain management, explained that gas stations are not willing to lower prices just because crude oil is cheaper because they can’t anticipate what oil prices will look like in the next few days or weeks. “They would rather take advantage of the consumer getting used to those elevated prices. If there is some predictable reduction in prices, then they can afford to pass on some of their savings to the consumers.” – 3/18/2022

License-to-carry applications have skyrocketed In Philly
By Victor Fiorillo | Philadelphia Magazine
Sociology professor David Yamane, author of the 2021 book “Concealed Carry Revolution,” said there’s a well-established trend over the past few decades of gun culture in America shifting from guns for sport to guns for personal defense. “This trend has accelerated during the pandemic and other events of the last two years. But this increase in Philadelphia is exceptional.” – 3/16/2022

The paradox of how antidepressants are tested
By Andy Extance | BBC
Mental health has never been so important, yet antidepressant drug trials typically exclude those who need help most. Now regulators and some researchers are asking if there needs to be a change in how these drugs are tested. “By excluding whole populations from research, entire groups of people are denied the potential benefits of research findings and their health may suffer as a result,” said Ana Iltis, director of the Center for Bioethics, Health and Society at Wake Forest. –3/15/2022

How universities support student mental health and wellbeing
By Razan Roberts | Agenda (World Economic Forum)
The pandemic has led to an increase in mental health struggles among many students. Student wellness at Wake Forest University has developed models that ensure student wellbeing on multiple levels, including the emotional, physical, social, intellectual, and financial dimensions. – 3/15/2022

Activists vow to take EU to court to fight its forest biomass policies
By Justin Catanoso | South Africa Today
Despite more than a decade of nonstop work, forest advocates have been stymied in their efforts to reverse European Union policies that encourage the burning of forests to make energy. Now they are testing a new line of attack — using existing statutes and regulations to take their complaint to the EU court system. – 3/17/2022

Atrium Health raises 37% of $500M philanthropic campaign less than a year after launching
By Caroline Hudson | Charlotte Business Journal
Atrium Health has raised about 37% of its $500 million Giving Hope Campaign goal since last year’s launch. Charlotte-based Atrium said this week its foundation has raised $184 million to date. The campaign, announced last May, is stretching over six years. It raised $75 million in its quiet period from individuals, foundations and corporations. Atrium CEO Gene Woods has said it is the largest philanthropic campaign in the area’s history. – 3/16/2022

Spotlight On: Charles Iacovou, Vice Provost – Charlotte Programs & Dean of the School of Professional Studies
By Andrea Salazar | Capital Analytics
Vice Provost Charles Iacovou of Wake Forest University’s Charlotte Programs and Dean for the School of Professional Studies spoke with Invest and discussed how the University promotes and encourages an inclusive and impactful environment for life-long learning. – 3/16/2022

Wake Forest medical school plans collaboration with French university
By Richard Craver | Winston-Salem Journal
The first local ripple effect from Atrium Health’s partnership with French medical groups involves the University of Strasbourg in France and Wake Forest University. The universities said Tuesday they have signed a letter of intent “to explore opportunities to engage in education and research collaborations,” along with Wake Forest School of Medicine and Atrium Health Wake Forest Baptist. Any physical presence would be based in downtown Winston-Salem’s Innovation Quarter. – 3/15/2022

Two historic exhibitions to open at Reynolda House
By Steve Bumgarner | Yes! Weekly
Two historic exhibitions will open at Reynolda House Museum of American Art in March and April. Substrata: the spirit of collage in 76 years of art will be on display from Mar. 18 until July 31, and Louise Nevelson: Architect of Light and Shadow runs Apr. 22 through Sept. 18. – 3/15/2022

Q&A: Ukrainian refugee crisis
By Cheryl V. Walker | Wake Forest News
More than 2.5 million refugees have fled Ukraine in the first two weeks of the Russian invasion. Professor of Politics Sarah Lischer, author of Dangerous Sanctuaries: Refugee Crises, Civil War and the Dilemmas of Humanitarian Aid, studies the politics of refugee crises and humanitarian action. Lischer addresses the challenges facing the refugees, the importance of international support, and lessons from the past. – 3/14/2022

Face to Face Forum to be held in honor of Inauguration of President Susan R. Wente
By Kim McGrath | Wake Forest News
Larry Culp, CEO of GE and Wake Forest University Trustee and Gene Woods, President and CEO of Atrium Health will discuss radical collaboration at a special Face to Face Speakers Forum in honor of the Inauguration of President Susan R. Wente. The event will be held on Thursday, March 24 at 6:30 p.m. in Wait Chapel and is free and open to the public. – 3/18/2022