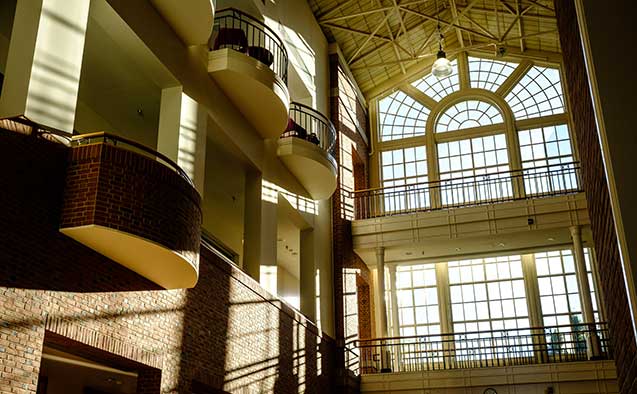 How marine viruses could impact climate change
By Keri Brown | Wake Forest News
Viruses are abundant in the ocean. There’s about a million viruses per teaspoon of seawater. When they infect marine bacteria, a new virocell (virus-infected cell) is created. Researchers didn’t know much about how these virocells interacted with other organisms in the ocean, but a new study co-authored by biology professor Sheri Floge is giving some insight. –11/21/2022

What does an SAT score mean in a test-optional world?
By Jeffrey Selingo | New York Magazine Intelligencer
In 2008, Wake Forest University became the first top-30 national university in the U.S. News & World Report rankings to go test optional; ten years later, the University of Chicago became the first top-ten university, and by 2019, more than a thousand colleges had gone test optional. – 11/18/2022

Time running out for 3 Biden EPA nominees
By Kevin Bogardus | POLITICO Pro
Stan Meiburg, executive director of the Center for Energy, Environment and Sustainability, said all three nominees should be confirmed. “And it could be done easily.” If the Senate doesn’t confirm Biden’s EPA picks before it adjourns, the president would have to renominate them after the Senate reconvenes in January. “You have to start over from the beginning.…that would be unfortunate,” – 11/18/2022

Abortion advocates aim to outflank lawmakers in 2024 using ballot measures
By Christine Vestal | Pennsylvania Capital-Star
Nationwide, 6 in 10 Americans say abortion should be legal in all or most cases, according to a June 2022 poll by the Pew Research Center. “Constitutional amendments have been underappreciated,” said politics professor John Dinan. “People tend to focus mainly on state litigation. But constitutional amendments are a far more durable way to ensure abortion rights than any court actions.” – 11/26/2022

This story also appeared in the St. Louis Post-Dispatch.

Supreme Court’s ‘independent state legislature’ case: How we got here, and what’s next
By Will Doran | The Charlotte Observer
Law professor John Korzen spent 45 pages in one brief arguing that a win for the legislature would make elections much more expensive in the future, and also much more confusing. Some valid ballots might be accidentally thrown out, he wrote, even as other ballots that should’ve been thrown out might get accidentally counted. “Voters need reassurance that election procedures produce accurate results. The more complicated and complex the system is, the more voters will question an election’s integrity.” – 11/27/2022

For retailers, a lot is riding on this holiday shopping season
By Richard Craver | Greensboro News & Record
With Thanksgiving on the calendar a little earlier than normal this year, and with many brick-and-mortar retailers remaining closed on Thanksgiving Day, Black Friday weekend “takes on more significance this season than in the recent past,” said Roger Beahm, executive director of the Center for Retail Innovation at Wake Forest University School of Business. “Consumers remember well the restraint they had to endure through COVID and subsequent supply-chain shortages,” Beahm said. “As a result, they are now showing a desire to exercise newly gained shopping freedom. This momentum should be sufficient to carry through the upcoming holiday shopping season.” – 11/24/2022

College students repurpose food for meal donations
By Sasha Strong | Spectrum News Charlotte
Ahead of Thanksgiving, students from the Campus Kitchen at Wake Forest University used food that would otherwise be thrown away and community donations to make hundreds of meals for nonprofits across the Winston-Salem area. – 11/23/2022